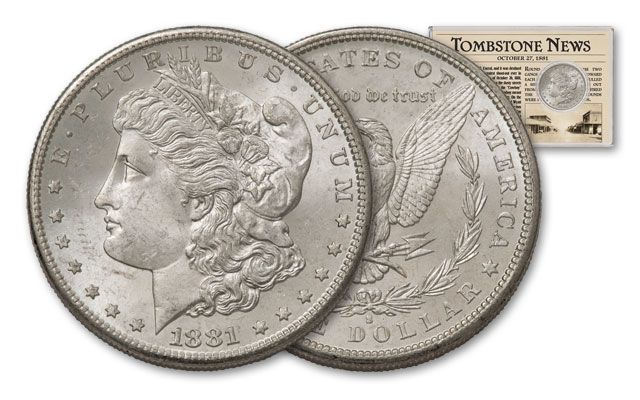 Availability: In Stock
This item will ship within 2 business days.
Item #
183519
Add to Wish List Add to Wish List Wishlist is for registered customers. Please login or create an account to continue. Add to Compare
Recommended Products
Product Description

The day that bullets flew at Tombstone, Arizona’s O.K. Corral in 1881, two American legends were born. The first was a tale of Wild West justice. The second: a Silver Dollar that would come to be known as the "Tombstone" Morgan.

This was the big silver coin that paid the poker bets, bar tabs and general store bills of upstanding citizens and outlaws alike. One or two might even have been tucked in the vest pocket of Wyatt Earp (one of the few men left standing) when he gunned down the Clanton and McLaury brothers that fateful day!

While they last, you can own an authentic 1881-S Tombstone Morgan for under $100 - a vintage Silver Dollar struck at the San Francisco Mint and named for that infamous gunfight in the silver mining boomtown. Considered by numismatic experts to be one of the finest Morgans ever minted, finding any quantity of these historic 132-year-old Silver Dollars has become increasingly difficult with every passing year.

In fact, it’s estimated that only 15% of all the Morgan dollars ever struck have survived to this day. And even fewer exist in uncirculated condition! That means that for every 100 silver dollars struck, 85 of them have been worn out, lost, or melted. So you can bet that these Brilliant Uncirculated (BU) Tombstone Silver Dollars won’t last long.

Don’t wait to add this legendary Morgan to your collection - order now!