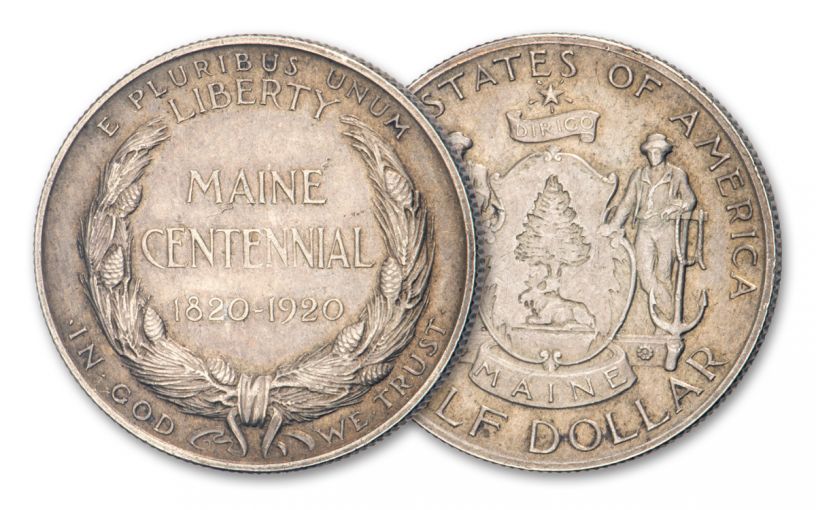 Availability: Out of Stock
This item is currently Out of Stock. Please sign up to be notified if this product becomes available.
Item #
353563
Add to Wish List Add to Wish List Wishlist is for registered customers. Please login or create an account to continue. Add to Compare
Recommended Products
Product Description

Silver Half Dollar Celebrates A Century of Maine History

Maine is without a doubt one of America’s most unique states. It averages 550 automobile/moose collisions per year, its residents can tell you a thing or two about eating clams, and evidently the pronunciation in this rugged state substitutes “ah” for “er” at the end of any word. And now, as the state is about to celebrate its bicentennial in 2020, a coin struck 100 years ago to pay tribute to its centennial anniversary is available for collectors.

Struck in 90% silver, the 1920 Maine Centennial Commemorative Silver Half Dollar was designed by Harry H. Cochrane and modeled by Anthony de Francisci, the artist behind the U.S. Peace Silver Dollar. The coin’s obverse features the Maine Coat of Arms, which depicts a shield that displays a resting moose beneath a pine tree flanked by a farmer on the left and a sailor on the right. Above the shield is a small North Star and the motto DIRIGO, which means “I direct,” in reference to the state’s status at one time of being the only state to hold, elections in September – an event that had many politicians claiming that “As Maine goes, so goes the nation.” The coin’s reverse features the 1820-1920 dual dates between a pine wreath.

The 1920 Maine Centennial Commemorative Silver Half Dollars were struck with the intention of selling them during the Centennial celebrations to be held that year in Portland. Legislation called for a mintage of 100,000 coins, but they were struck too late for the event. The Philadelphia Mint ended up striking just 50,028 of these coins and they were sold through the Office of the Treasurer for $1 apiece. Collectors scooped up the first 30,000 coins before the end of the year. The last of the mintage was finally sold by 1929.

Now you can secure this popular collector coin for your collection. Each coin available in this offer comes in Extremely Fine to About Uncirculated (XF-AU) condition with some original mint luster and only slight overall wear. This is a fantastic condition for a coin on its own centennial anniversary!

The 1920-P Maine Centennial Commemorative Silver Half-Dollar is one of America’s most popular commemoratives. Don’t miss your chance to get this beautiful-yet scarce coin. Click it to your cart today!