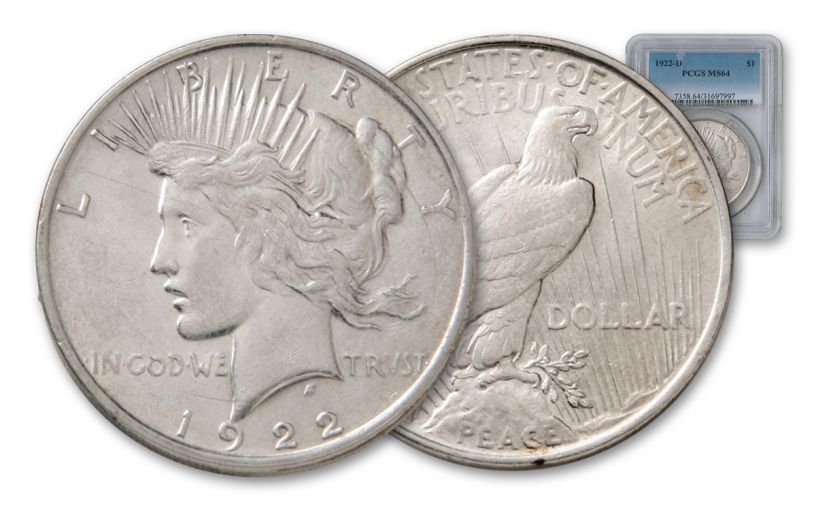 Availability: Out of Stock
This item is currently Out of Stock. Please sign up to be notified if this product becomes available.
Item #
349365
Add to Wish List Add to Wish List Wishlist is for registered customers. Please login or create an account to continue. Add to Compare
Recommended Products
Product Description

The very first “Peace” Silver Dollar, so named for its introduction at the end of World War I, was a failure. Struck in 1921 and released to the public in the early days of 1922, its stunning high-relief design was notoriously difficult to strike. And so, soon after the calendar flipped over to 1922, the U.S. Mint re-designed the coin for a standard relief strike, and the rest is history. The last silver dollar struck for circulation in 90% fine silver, these coins celebrated our victory in World War I, became associated with speakeasies and big-screen gangsters, and were eventually rounded up and melted down. Today the Peace Dollar has become an unequivocal collector favorite.

Now you can add one of the first-year standard-relief Peace Silver Dollars, struck in 90% fine silver at the Denver Mint, to your collection. Each coin available here has been certified by either the Numismatic Guaranty Corporation (NGC) or the Professional Coin Grading Service (PCGS) as being in Choice Uncirculated Mint State-64 (MS64) condition. Grading service varies. Don’t miss your chance to obtain a high-grade key-date coin from this fabulous  often-overlooked series!

The 1922-D Peace Silver Dollar is the first standard relief coin in the series. Here’s your chance to get one graded in Mint State-64 condition. These coins fueled the Roaring ’20s and they’ll be the Bees Knees in your collection!