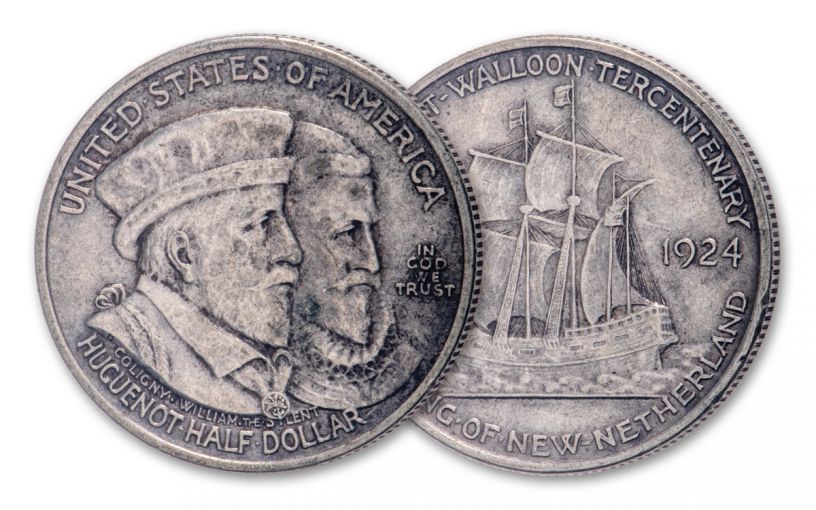 Availability: Out of Stock
This item is currently Out of Stock. Please sign up to be notified if this product becomes available.
Item #
349352
Add to Wish List Add to Wish List Wishlist is for registered customers. Please login or create an account to continue. Add to Compare
Recommended Products
Product Description

As the designer of the famous Morgan Silver Dollar, George T. Morgan holds a place in the pantheon of great American coin designers that is second to none. But even that didn’t spare him from controversy in his final days when through no fault of his own he became embroiled in a religious bruhaha over this commemorative half dollar. Struck to commemorate the 300th Anniversary of the 1624 settlement of present-day New York, the 1924 Huguenot-Walloon Tercentenary Commemorative Silver Half-Dollar drew the ire of many people because it seemed to be sponsoring a religious group.

Congress authorized a mintage of 300,000 commemorative half-dollars struck in 90% silver depicting William the Silent and Gaspard de Coligny – leaders of the Protestant Dutch and French Huguenots who fought against religious oppression by the overwhelmingly Catholic majority in 16th Century France. As many as 30,000 Huguenots were killed during a wave of Catholic mob violence known as the Saint Bartholomew's Day massacre that spread across France on the night of August 23-24, 1572. To escape persecution, many Huguenots relocated to other Protestant states in Europe and assimilated into their new homes. Eventually some even sailed to Dutch colonies in North America, among them were the Walloons, a French-speaking Protestant community in southern Belgium.

The choice of William the Silent and Gaspard de Coligny to appear on the obverse of this coin was questioned as the men are considered martyrs by the Huguenots and were assassinated decades before the voyage of the Dutch vessel Nieuw Nederlandt that’s depicted on the coin’s reverse. Nonetheless, sketches were prepared and converted to plaster models by Morgan, the U.S. Mint's aging chief engraver (the 79-year-old Morgan passed away just a few months later on January 4, 1925). Of the 300,000 coins authorized by Congress, fewer than half were actually struck, and of those, 55,000 were returned to the Mint and released into circulation.

We managed to assemble a small hoard of vintage 1924 Huguenot-Walloon Tercentenary Commemorative Silver Half-Dollars that were struck at the U.S. Mother Mint in Philadelphia. It’s an important piece that commemorates the 300th Anniversary of the founding of New Netherland – present-day New York – and comes in Extremely Fine (XF) condition! Add one of these Beautiful coins to your collection today!

Pay tribute to the historic 300th Anniversary of the founding of New York with the 1924-P Huguenot-Walloon Commemorative Silver Half Dollar. Get yours now before they’re gone in a New York minute!