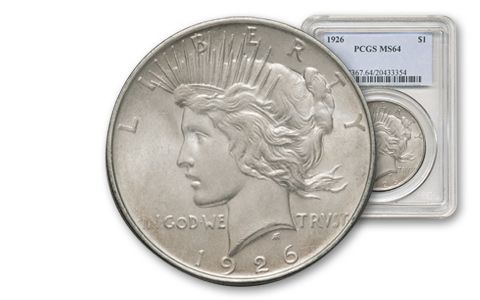 Availability: Out of Stock
This item is currently Out of Stock. Please sign up to be notified if this product becomes available.
Item #
228210
Add to Wish List Add to Wish List Wishlist is for registered customers. Please login or create an account to continue. Add to Compare
Recommended Products
Product Description

Engraver Makes a Monkey Out of Darwin!

In 1925, the country was embroiled in an explosive controversy over Darwin and evolution. While the Scopes “Monkey Trial” was underway, it may have made its mark on the Peace Silver Dollars produced at the U.S. mint. The alleged story goes that U.S. Mint Chief Engraver John Sinnock purposely highlighted the word “God” on the coin’s motto, proclaiming his own belief on the subject. Today, his 1926 Peace Dollar design with GOD in high relief is elusive and sought after, but you have the chance to secure one graded by either the Numismatic Guaranty Corporation (NGC) or Professional Coin Grading Service (PCGS) as being in fantastic Mint State-64 (MS64) condition. Grading service varies. Order now!

The U.S. Mint weighed in on the Scopes Monkey Trial with the 1926-P Peace Silver Dollar that emphasized the word GOD in the coin’s motto. Now you can weigh in on it yourself by securing this fascinating historical coin in gleaming Mint State-64 condition! Click it to your cart today!