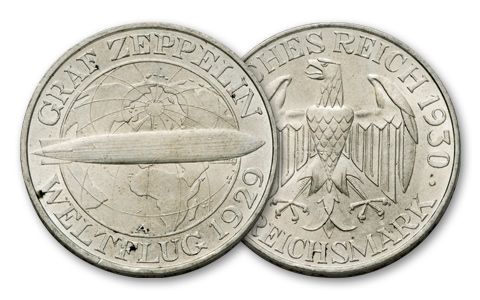 Availability: Out of Stock
This item is currently Out of Stock. Please sign up to be notified if this product becomes available.
Item #
232525
Add to Wish List Add to Wish List Wishlist is for registered customers. Please login or create an account to continue. Add to Compare
Recommended Products
Product Description

That cry was broadcast to radio listeners across the nation by an on-site reporter witnessing the Zeppelin Hindenburg consumed by flames at Lakehurst, New Jersey in 1937, seventy five years ago. The disaster doomed Germany's Zeppelin fleet to the mothballs just as it was experiencing a huge success. Count von Zeppelin's airship was a marvel of German Engineering, of which the German nation was rightly proud. So proud, in fact, that in 1930 Germany issued this 3 Mark silver commemorative to celebrate the Graf Zeppelin's Weltflug-around the world flight. The coin feature the Zeppelin over a globe. They were immediately a big hit with coin collectors, and the frenzy to own them persists to this day. It's one of the 20th century's most classic coin designs. Whenever they appear collectors eagerly snap them up. Through a diligent effort, we've accumulated barely 20 of these special coins, and to honor the 75th anniversary of that fateful day in Lakehurst, we're releasing every one. Each coin is in Fine (F) to Very Fine (VF) condition and includes a certificate of authenticity and a replica newspaper detailing the disaster. A true prize for every history buff. Don't wait, these will sell out very quickly.