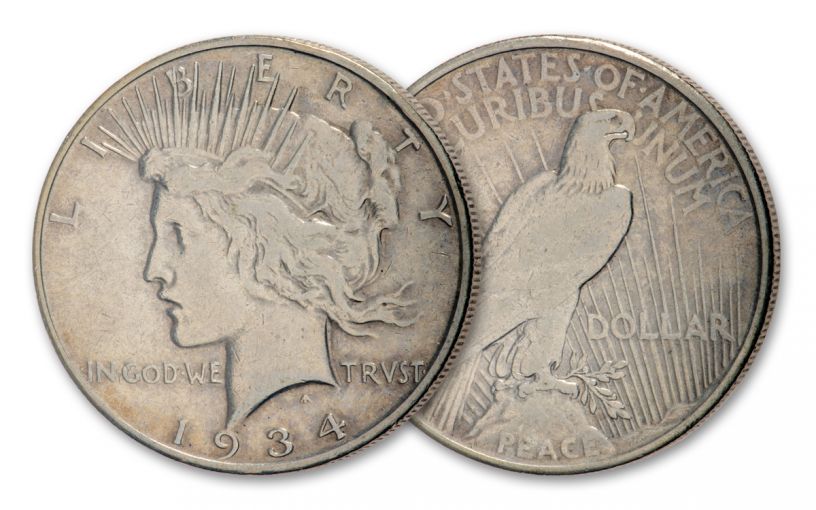 Availability: Out of Stock
This item is currently Out of Stock. Please sign up to be notified if this product becomes available.
Item #
234209
Add to Wish List Add to Wish List Wishlist is for registered customers. Please login or create an account to continue. Add to Compare
Recommended Products
Product Description

The San Francisco Mint is respected in the collecting world as striking some of the finest coins in U.S. history. Perhaps it’s because they respected quality over quantity – after all, they struck only 27% of the total production. And in 1934 – the same year Depression-Era bank robbers John Dillinger and Bonnie and Clyde were gunned down – the San Francisco Mint struck just over one million Peace Silver Dollars – one of the smallest mintages of the entire series! That’s why we’re so happy to bring you this 1934-S Peace Silver Dollar in Very Fine (VF) condition. It’s a beautiful, low-mintage coin that’s also affordable – just look at the 2019 Red Book and you’ll see the same coin in MS60 to MS64 grades valued at $2,500 to $7,000! Now you can get a very nice example of this key-date coin for less than a hundred bucks!

No one knows for sure how many historic Peace Silver Dollars still remain today, but it is certain that they are some of the most popular and widely collected American coins in the world. Don’t miss your chance to obtain a key-date coin from the fabulous often-overlooked series!

Get one of these key-date Peace Dollars struck at the San Francisco Mint. Each will come in Very Fine (VF) condition. Quantities are limited so order yours now!