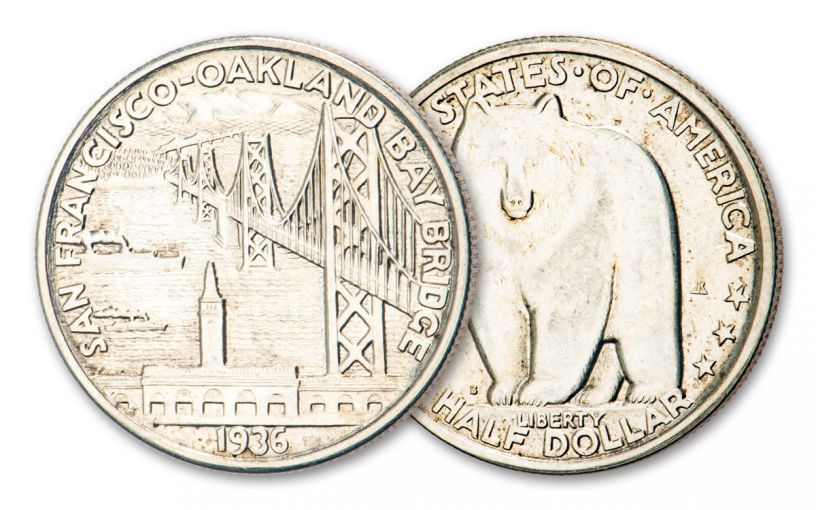 Availability: In Stock
This item will ship within 2 business days.
Item #
353432
CC Payments as low as
$99.50 / month
Add to Wish List Add to Wish List Wishlist is for registered customers. Please login or create an account to continue. Add to Compare
Recommended Products
Product Description

To celebrate the opening of the San Francisco-Oakland Bay Bridge in 1936, the San Francisco Mint struck a special one-year-only commemorative half dollar. Not only has it proven to be a popular coin among collectors, but it represents the only United States coin dedicated solely to the recognition of an engineering triumph.

Struck in 90% silver, the coin was designed by Jacques Schnier and featured the newly completed bridge along with a ferry building in the foreground to represent a changing of the guard between the old and new ways of transportation. The coin’s obverse depicts a gigantic grizzly bear, the symbol of California.

The Mint struck 100,000 of these coins and they were sold for $1.50 apiece at various location around the Bay Area – including at the bridge’s toll booths! Sales were brisk as more than 71,000 Bay Bridge Commemorative Silver Half Dollars were purchased by residents and tourists eager to have a memento of the new engineering marvel that connected San Francisco and Oakland. The unsold coins were later melted.

Now you can secure this popular collector coin for your collection. Each coin available in this offer comes in Extremely Fine to About Uncirculated (XF-AU) condition with some original mint luster and only slight overall wear. This is a fantastic condition after surviving more than 80 years since they were first offered to the public!

The 1936-S Bay Bridge Commemorative Silver Half-Dollar is one of America’s most popular commemoratives. Don’t miss your chance to get this beautiful coin. Click it to your cart today!