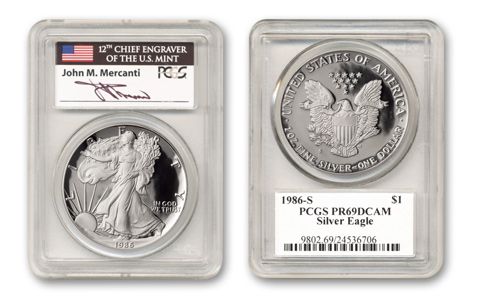 First year, practically perfect - and signed by the designer! What more could you want in a Silver Eagle?

Not long ago, we received a call from an executive at one of the world's leading independent coin certification firms, Professional Coin Grading Service (PCGS). He had been in touch with a certain John Mercanti. Would we be interested in hosting a visit?

Our answer? An unqualified "YES!"

Here's why: the U.S. Mint was founded by an act of Congress in 1792. That act also created what is perhaps the most important position at the mint - the Chief Engraver. He's the person in charge of coin designs and engraving the dies used to strike them. In 221 years, the mint has had only twelve Chief Engravers. You might recognize one of them as the man who designed one of the most popular and sought-after Silver Dollars in American history: George T. Morgan. But, you probably never heard of the twelfth Chief Engraver, even though it's likely a few of the coins he designed are in your pocket right now! His name? John Mercanti.

In his tenure at the U.S. Mint, Mr. Mercanti designed more coins and medals than any other Chief Engraver in history. Some of his most famous include: the 1984 Olympic $10 Gold Piece (the first U.S. gold coin struck in 51 years), the 1986 Statue of Liberty Silver Dollar, and the obverse of the 1991 Eisenhower Silver Dollar, as well as the Arkansas, Iowa, North Carolina, Pennsylvania and West Virginia State Quarters.

But one of his designs stands head and shoulders above the rest: The American Eagle Silver Dollar! First authorized by Congress in 1986, the One-Ounce Silver Eagle became an easy and affordable way for individuals to own silver. Each was struck in 99.9% silver with the classic image of Miss Liberty on the obverse, and John Mercanti's spread-winged eagle on the reverse.

It's been so popular, that more than 300 million Silver Eagles have been struck in their 27 year history. And, just like the iconic Morgan, the Eagle is instantly recognizable worldwide as America's current Silver Dollar. So, what could make a Silver Eagle even more popular? How about a coveted first-year Deep Cameo Proof in near-perfect condition, plus the personal signature of the designer?

During Mr. Mercanti's recent visit, many of our staff asked for his autograph; some even wanted to know if they could get his autograph on their Silver Eagles. That's when the PCGS executive told us that this was actually possible. If Mr. Mercanti signed the PCGS grading label before it was sealed with the coin in the holder, collectors could then own a personally autographed John Mercanti Silver Eagle! But, here's where the story gets better! Because, even without the Mercanti signature, these 1986 Silver Eagle Proofs are no ordinary coins!

Struck for collectors in less than half the mintage of ordinary bullion Silver Eagles, our limited quantity of first-year Proofs were also designated as Deep Cameo (DCAM) - coins with spectacular mirrored backgrounds and deeply frosted images! Better yet, each was judged by PCGS to be in near-perfect PR69 condition! But, we have fewer than 310 available!

Now imagine you could go back in time and secure George T. Morgan's signature on an envelope holding one of his Morgan Silver Dollars. What would it be worth today? Certainly far more than an unsigned version! That's why you won't want to miss this opportunity to add a Mercanti signature Silver Eagle to your collection! Just act fast - the last time we sold a 1986 Silver Eagle we completely sold out. And, once these first-year Mercanti-signed 1986 Silver Eagle Proofs are gone, they're gone for good!