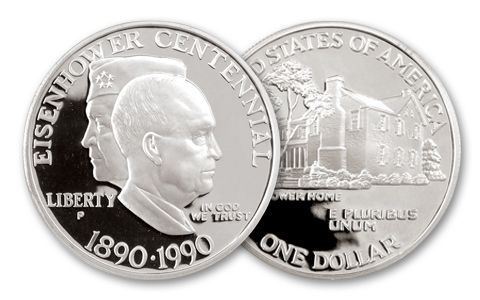 Why Everybody Still Likes Ike

Dwight David Eisenhower is one of the most celebrated Americans of the 20th century. As a five-star general in the United States Army, he served as the Supreme Commander of the Allied Expeditionary Force in Europe during World War II, organizing the famous D-Day invasion. After the war, Eisenhower was elected as the 34th President of the United States, serving from 1953 to 1961 in an era defined by the slogan “I Like Ike.”

Struck at the Philadelphia Mint in highly pure 90% fine silver, this one-year-only commemorative dollar was minted in 1990 to celebrate the centennial of Eisenhower’s birthday. The reverse depicts his home in Gettysburg, Pennsylvania, but it’s the obverse that steals the show: a unique dual design of Eisenhower — showing a portrait of President Eisenhower facing right superimposed over a profile of General Eisenhower facing left. The design comes courtesy of John Mercanti, 12th Chief Engraver of the U.S. Mint.

In addition, each coin available in this offer comes in gorgeous Proof condition. That means each was expertly crafted by the mint from hand-selected planchets, polished dies and multiple strikes to produce beautifully frosted details rising over mirror-like fields. Don’t miss your chance to pay tribute to one of America’s greatest leaders; secure this one-year-only 1990-P Eisenhower Commemorative Silver Dollar now!

Like George Washington and Ulysses Grant before him, Eisenhower was a general who led the nation to victory in times of war and guided the country through times of peace in the years that followed. Pay tribute to this great American and secure your 1990-P Eisenhower Commemorative Silver Dollar today!