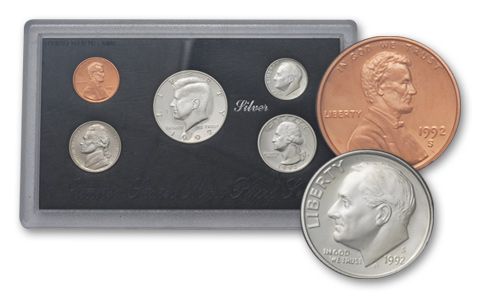 Availability: Out of Stock
This item is currently Out of Stock. Please sign up to be notified if this product becomes available.
Item #
182428
Add to Wish List Add to Wish List Wishlist is for registered customers. Please login or create an account to continue. Add to Compare
Recommended Products
Product Description

Later in the 19th century, the mint struck proof coins to order. And starting in 1936, they began selling complete Proof Sets. Since then, the historic U.S. Silver Proof Set series has grown to become one of our most popular issues each year. We’re pleased to be able to offer the key-date 1992 Silver Proof Set – the first proof set with the cupronickel denominations replaced by coins struck in 90% fine silver! Each set includes the Lincoln Cent, Jefferson Nickel, Silver Roosevelt Dime, Silver Washington Quarter and Silver Kennedy Half Dollar. These sets were released in the historic bicentennial year of the establishment of the U.S. Mint and saw the dime, quarter and half dollar all struck in 90% silver.

Your set will come in its original U.S. Mint packaging. It’s the perfect starting point for any U.S. Silver Proof set Add one to your cart today!

Get the key-date 1992 U.S. Mint Silver Proof Set – it’s a masterpiece in numismatic perfection and a great addition to any coin collection. Order yours today!