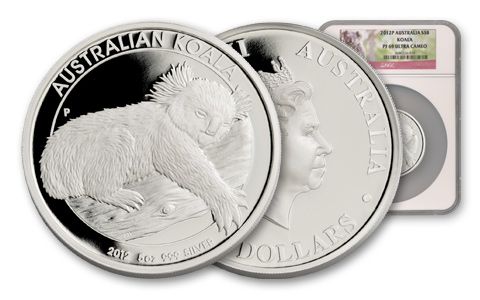 Availability: Out of Stock
This item is currently Out of Stock. Please sign up to be notified if this product becomes available.
Item #
239930
Add to Wish List Add to Wish List Wishlist is for registered customers. Please login or create an account to continue. Add to Compare
Recommended Products
Product Description

In 2011, the world-famous Perth Mint issued the In 2011, the world-famous Perth Mint issued the first-ever Five Ounce Silver Koala Proof to commemorate the fifth anniversary of its popular Silver Koala series. Struck in five full ounces of 99.9% pure silver, it was a huge hit with collectors worldwide! And why not? With a diameter close to that of a baseball, and measuring almost one-third of an inch thick, these massive silver Proofs make a big impression in any Koala collection! And, while a 2011 Five Ounce Silver Koala may be tough to find, there's still time to get your hands on one of our last remaining 2012 Proofs! With their mirror-like backgrounds and delicate frosted foregrounds, Proofs are the best of the best from the Perth Mint - which is known internationally for its rigorous standards. And, that quest for perfection is just one of the reasons coins from Australia's oldest operating mint are so sought-after by discriminating collectors.

Better yet, each of these hefty 2012 Silver Koala Proofs have been certified by Numismatic Guaranty Corporation (NGC) to be in Proof 69 (PF69) condition - just one point shy of the 70 required to rank as a perfect, flawless example. These are the near-perfect coins that collectors covet. They're always in demand. Always the most sought after. And always among the first to garner a premium price. Of course no one can predict the future value of any coin, but take a look at what other 2012 five ounce silver coins (in the same near-perfect condition) can go for today:

Now here's the bad news: just like their first year, only 5,000 of these giant Koalas were struck in 2012 - disappointing everyone who had hoped for a much larger second-year mintage. Including us. Act now to own one of the last 2012 Five Ounce Silver Koalas we have in stock!