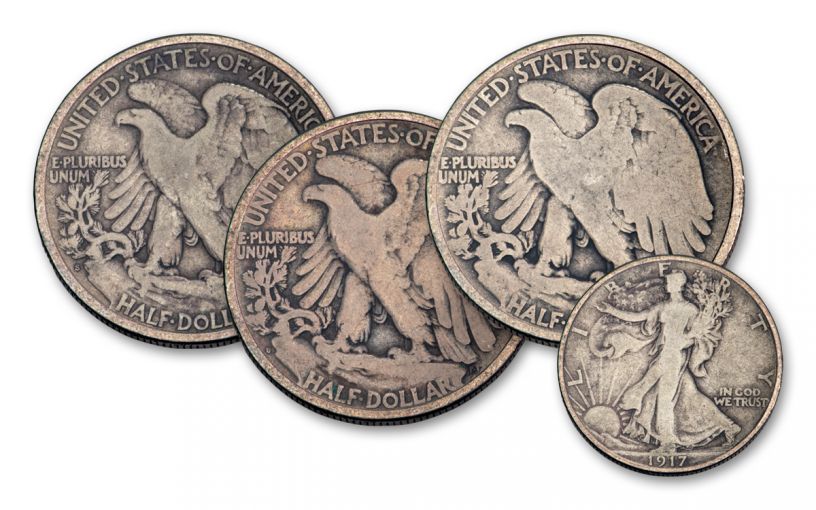 Availability: Out of Stock
This item is currently Out of Stock. Please sign up to be notified if this product becomes available.
Item #
349434
Add to Wish List Add to Wish List Wishlist is for registered customers. Please login or create an account to continue. Add to Compare
Recommended Products
Product Description

The Walking Liberty Half Dollar – affectionately known to many collectors as “Walkers” – is surely one of the most beautiful coins ever struck by the U.S. Mint. The Walking Liberty obverse is so iconic and beloved that it was resurrected in 1986 as the obverse for today’s Silver Eagles! But what we have here are not just any Walkers, but the complete mint mark set from the incredible second-year-of-issue 1917 coins struck in Philadelphia, Denver and San Francisco. Far more affordable than the series’ first-year-of-issue, these coins are where many collectors begin.

Issued from 1916-1947, the Walking Liberty Silver Half Dollar series is even more popular today that when it circulated during the first half of the 20th Century. And now you can secure a complete 1917 mint mark set! This 1917-PDS Walking Liberty Silver Half Dollar Three-Piece Set is a great way to start, add to, or complete your own collection of “Walkers.” Don’t let these coins walk away; order your set today!

This 1917 Walking Liberty Half Dollar is a staple of American history. Click these key-date coins to your cart today!