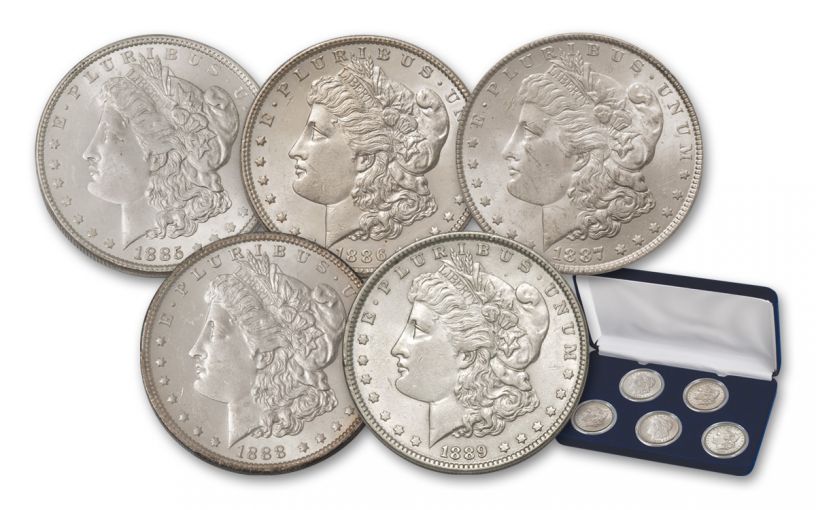 Availability: In Stock
This item will ship within 2 business days.
Item #
351702
CC Payments as low as
$225.00 / month
Add to Wish List Add to Wish List Wishlist is for registered customers. Please login or create an account to continue. Add to Compare
Recommended Products
Product Description

The Philadelphia Mint is the first official United States Mint, established in 1792. For this reason, it’s gained the nickname of the “Mother Mint.” Meanwhile, the Morgan Silver Dollar is one of the most collected vintage silver coins in the world. Struck in massive quantities from 1878 to 1921, mass meltings and the ravages of time have resulted in as few as an estimated 15% of all Morgans still remaining in any condition.

This incredible set contains five consecutively dated Morgan Silver Dollars from 1885 to 1889, all from the Mother Mint in Philadelphia struck during the heyday of America’s “Gilded Age.” Still in their original Brilliant Uncirculated (BU) condition after more than 130 years, these 90% silver coins come from the first days of the Statue of Liberty, the publication of Mark Twain’s Adventures of Huckleberry Finn and the final days of America’s storied Wild West. It’s a beautiful set worthy of any collection!

Step back in time to the late 1800s and secure a gleaming pocket full of gleaming Brilliant Uncirculated Morgans struck at the Philadelphia Mint. Start, complete or add on to your Morgan collection today!