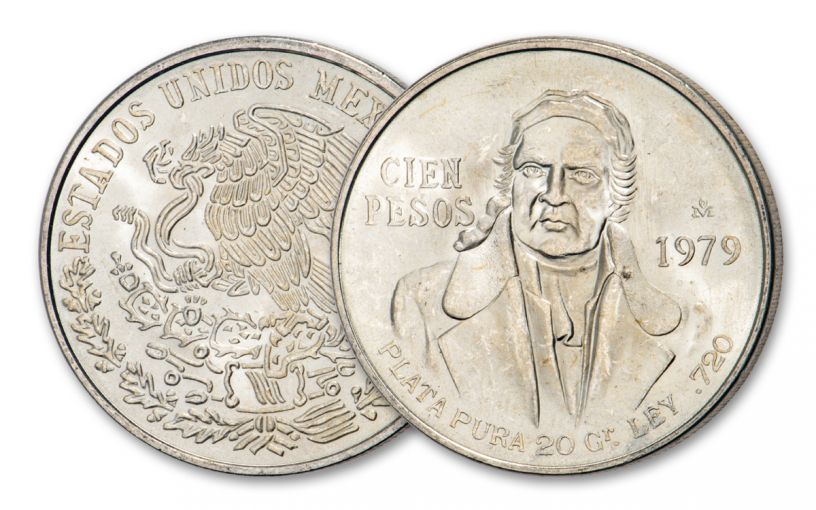 Availability: Out of Stock
This item is currently Out of Stock. Please sign up to be notified if this product becomes available.
Item #
353559
Add to Wish List Add to Wish List Wishlist is for registered customers. Please login or create an account to continue. Add to Compare
Recommended Products
Product Description

Be the First the Secure Mexico’s Last “Silver Dollar”

In 1977, Mexico introduced its first-ever 100 Pesos coin, struck to about the same size as a hefty U.S. Silver Dollar. But then, the price of silver rose to such a cost that it was no longer practical to produce the coins, and they were replaced with a smaller, base metal coin. Weighing in at 27.78 grams and struck in 72% fine silver, the 1979 Mexico 100 Pesos coin is therefore considered the last “Mexican Silver Dollar” struck for circulation!

We recently secured a hoard of these historic coins each in gleaming Brilliant Uncirculated (BU) condition as fresh and crisp as the day it the La Casa de Moneda de México – the famed Mexico City Mint. The national mint of Mexico, the Mexico City Mint is the first and oldest mint of the Americas with a history that backs to 1535 when it was established by the Spanish Crown.

This coin is also significant for its depiction of Jose Maria Morales – one of Mexico’s most legendary heroes in the revolutionary war with Spain. Morelos was a statesman and Roman Catholic priest who assumed leadership of the Mexican independence movement in 1811 after the rebellion’s leaders had been captured and executed. A child of mixed ethnic heritage, Morales won the people over with his optimism and vision of a free nation for all people. Like his predecessors, he, too, was captured and executed after being convicted in 1815 by a kangaroo court of Spanish sympathizers. The legacy Morelos left behind helped unite the nation in its fight for freedom that was finally won six years later in 1821.

It’s interesting to note that the United States did not have any silver dollars circulating in 1979. The Eisenhower Dollar’s last year of striking was 1978 –and that coin contained 75% copper and 25% nickel. In 1979 the Ike Dollar gave way to the small-sized Susan B. Anthony Dollar, which likewise contained no silver. Don’t miss your chance to add this wonderful piece of silver history to your collection today at a very minimal cost. Be one of the first to grab one of Mexico’s last “Silver Dollars.” Order this historically significant coin now before they’re all gone!

Mexico’s Peso was originally a large silver coin that progressively shrank due to inflation and government mismanagement until finally it contained no silver at all. This coin represents that last of the silver Pesos and will make a remarkable addition to your collection.