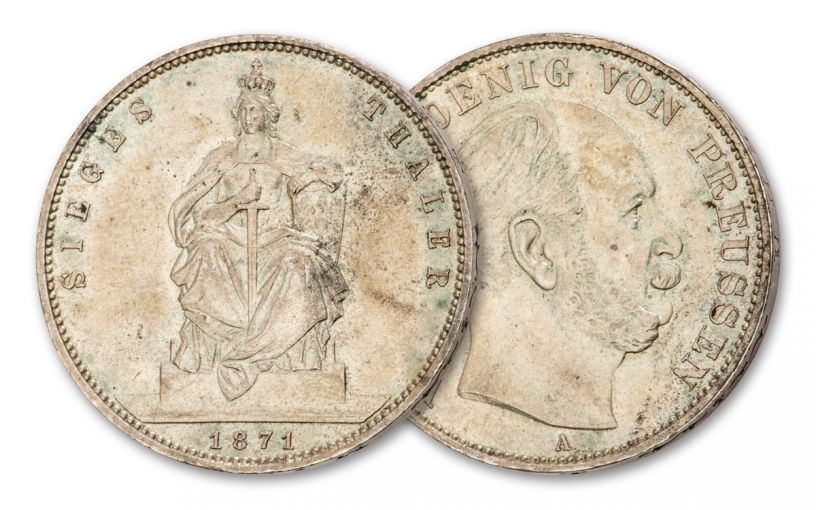 Availability: In Stock
This item will ship within 2 business days.
Item #
350921
Add to Wish List Add to Wish List Wishlist is for registered customers. Please login or create an account to continue. Add to Compare
Recommended Products
Product Description

Vintage European silver coinage can be few and far between these days. Finding even a small hoard becomes more difficult with each passing year. So, it was incredibly lucky that we managed to come across this unique Prussian Silver Thaler, a low-mintage, one-year-only issue from German Empire’s most prominent and influential state that was released during the pivotal Unification of Germany in 1871.

Struck in 90% silver at the Berlin Mint, the coin features a portrait of Wilhelm I, King of Prussia and the first German Emperor. He began his reign in Prussia in 1861 and was crowned German Emperor in 1871 – the same year this coin was struck. Wilhelm held both titles until his death in 1888. He survived two assassination attempts during his reign, and upon his death he was succeeded by his son Frederick III, who reigned for just 99 days before giving way to his son, Kaiser Wilhelm II.

About the same size as a U.S. half dollar, this 148-year-old coin was released to commemorate the German States’ victory over France in the Franco-Prussian War, a conflict that marked the downfall of Napoleon III and the end of the second French Empire and brought about the final unification of the German Empire. The coin’s reverse features a crowned seated figure holding a sword with the words SIEGES THALER, which translates to “Victory Thaler” or quite literally “Victory Dollar.” The figure is so beautifully struck that it almost appears to be levitating, an astute design for the rising power of Germany throughout Europe at that time.

Just 880,000 of these beautiful silver coins were ever struck. That’s a relatively small mintage, especially when you compare it to the 3.5 million U.S. Half Dollars that were struck that same year. Just how many of these one-year-only commemorative Thalers still survive is anyone’s guess, so hurry and secure yours now!

This is your chance to get one of the most historic European silver coins struck during the later half of the 19th Century. Add this scarce, one-year-only commemorative to your collection today!