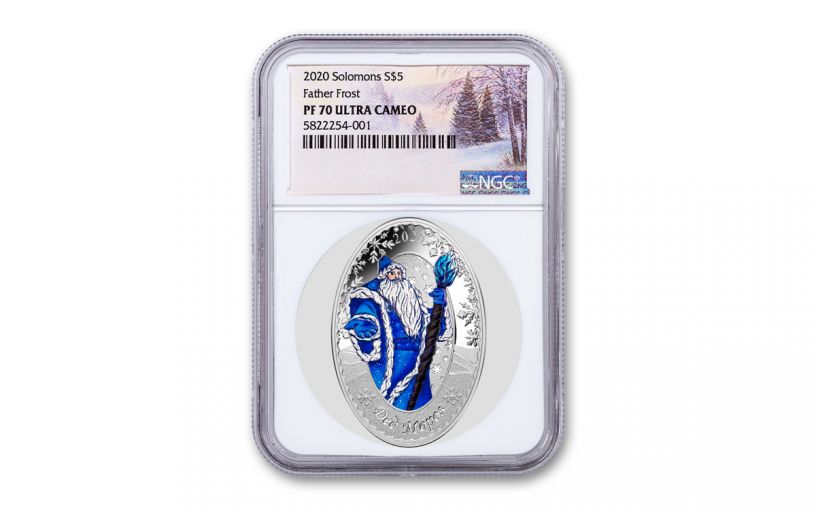 Availability: Out of Stock
This item is currently Out of Stock. Please sign up to be notified if this product becomes available.
Item #
355885
Add to Wish List Add to Wish List Wishlist is for registered customers. Please login or create an account to continue. Add to Compare
Recommended Products
Product Description

In Russia, there is no jolly fat man in a red suit enjoying a bottle of soda at Christmastime. Instead there’s Father Frost. But when the Bolsheviks violently seized power, one of the first things they banished was Christmas. Talk about a bunch of Grinches! Among the symbols of Christmas, they exiled was Father Frost. Known as Ded Moroz, the Communists regarded him as a silly children’s god. Proving that you can’t keep a good man down, this Russian version of Santa Claus was welcomed back by the Soviets in the late 1930s appearing in public New Year’s celebrations and where he was given credit for leaving presents under fir trees each New Year’s Eve for Russian children to find in the morning.

Father Frost is not only the Slavic version of Santa Claus, he’s also the symbol of Russian Winter. And now he’s also the star on the latest addition to the Solomon Islands’ popular Matryoshka Doll coin series. This unique, oval-shaped proof features a dazzling depiction of the Russian folk hero in full color. With his long white beard, fur-lined mittens & coat and ever-present crystal pikestaff, the image effectively captures the indefatigable spirt of Father Frost. It’s a frosty coin that’s sure to warm anyone’s heart!

Struck in a full ounce of highly pure 99.9% silver, this legal-tender $5 coin also comes in gorgeous proof condition, meaning it was expertly crafted from hand-selected planchets, polished dies and multiple strikes to produce beautifully frosted details rising over mirror-like fields. In fact, your 2020 Solomon Islands One-Ounce Silver Father Frost Colorized Oval Proof has been graded by the Numismatic Guaranty Corporation (NGC) as being in flawless Proof-70 Ultra Cameo (PF70UC) condition, a distinction that means your perfectly-graded proof will have ZERO imperfections – showing all features and fields exactly as the engraver and mint intended!

The limited edition for these fabulous proof coins was frozen at just 5,000 with no more to come. Not only is that an incredibly small mintage, but it’s already been announced as being totally sold out! Perfect for gift-giving this holiday season, don’t wait much longer to order one of these coins or you’ll be left out in the cold!

These 2020 Solomon Islands One-Ounce Silver Father Frost Colorized Oval Proofs are cooler than a Russian winter! With the entire mintage announced as being sold out, the time to get one is now before the rest of these coins melt away.