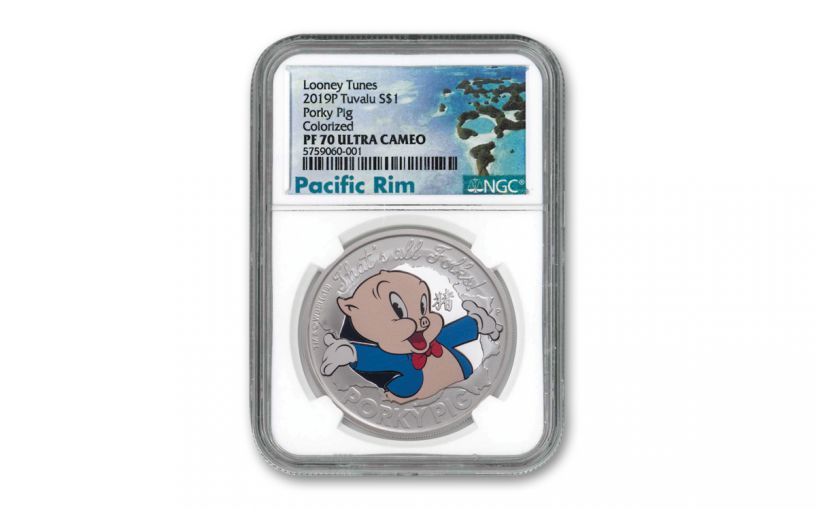 Availability: Out of Stock
This item is currently Out of Stock. Please sign up to be notified if this product becomes available.
Item #
352828
Add to Wish List Add to Wish List Wishlist is for registered customers. Please login or create an account to continue. Add to Compare
Recommended Products
Product Description

Little-known fact: When Porky Pig™ made his screen debut in the1935 animated short I Haven’t Got a Hat, it was released during the Chinese Lunar Year of the Pig, Now, 84 years later, 2019 is once again the Year of the Pig, so why not celebrate with one of the world’s most famous pigs with this silver dollar struck by Australia’s world-renowned Perth Mint.

Issued on behalf of the island nation of Tuvalu, this Porky Pig Silver Dollar is struck in one-ounce of highly-pure 99.99% fine silver. Fittingly, it features the famous image seen at the end of every Looney Tunes cartoon – Porky exploding out of the end slate and struggling through the words “That’s all, Folks!” as brilliantly stammered by the unforgettable voice talents of Mel Blanc. The image is even more dynamic because Porky has been fully colorized from his pink little snout down to his adorable red tie. The rest of the silver dollar features a beautiful Proof finish, with frosty details and mirrored fields.

In fact, your 2019 Tuvalu $1 Porky Pig One-Ounce Silver Coin has been graded by the Numismatic Guaranty Corporation (NGC) as being in flawless Proof-70 Ultra Cameo (PF70UC) condition, a distinction that means your perfectly-graded proof will have ZERO imperfections – showing all features and fields exactly as the engraver and mint intended!

Officially licensed by Warner Bros., the 2019 Tuvalu Porky Pig One-Ounce Silver Proof is strictly limited to just 5,000 pieces. Each will come in its original Perth Mint packaging and accompanied by a numbered certificate of authenticity. Be sure to secure yours soon before we’re forced to utter Porky’s immortal catch phrase to our customers – only this time it’ll be, “Sorry, Folks. Th-Th-Th-That’s All!”

Celebrate the Year of the Pig with the world’s most popular porcine personality. Secure your 2019 Tuvalu $1 Porky Pig One-Ounce Silver Proof today!