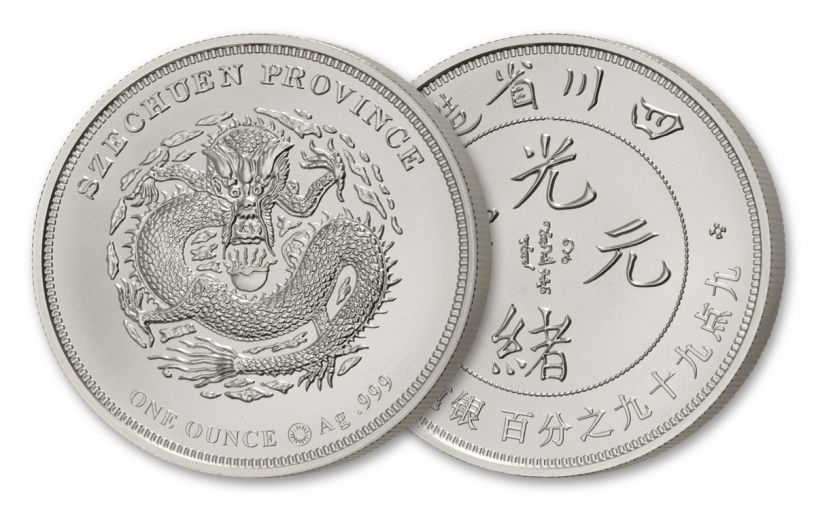 Availability: Out of Stock
This item is currently Out of Stock. Please sign up to be notified if this product becomes available.
Item #
337777
Add to Wish List Add to Wish List Wishlist is for registered customers. Please login or create an account to continue. Add to Compare
Product Description

That headline is no mistake! In 1896, the Chinese province of Szechuan needed new minting equipment, and the Ferracute Machine Company of Bridgeton, New Jersey won the bid. For a whopping $13,000, the company agreed to send five coin presses, punching presses, feed attachments and new coin dies.

As part of the package, the company enlisted famous U.S. Mint Engraver Charles Barber to design coins for the province. Using the Chinese Kwangtung dollar as his inspiration, Barber designed and sculpted a number of beautiful dies in five different denominations to demonstrate what the presses could do. A small number of patterns were then struck in silver and bras and handed out to dignitaries who attended the special event in New Jersey prior to the presses being shipped to China. Then, tragedy struck.

The presses arrived at their intended destination, but before the equipment could be even used the minting facility flooded, causing extensive damage to the equipment and dies. The presses would later be restored, but there was just no saving the dies. New ones were created by Chinese artists, but they failed to match Barber’s level of precision.

Today, you can find one set of original patterns in the Shanghai Mint’s museum collection, and another at the Smithsonian® numismatic collection. It’s from these patterns that new dies were made, allowing us to bring you these fantastic medals struck at the prestigious Singapore Mint!

You can add this one-ounce medal in highly-pure 99.9% silver. The gleaming design of Barber’s magnificent Chinese dragon curling around the center of the medal’s reverse is an unsurpassed example of the engraver’s art. Plus, it comes in gleaming Brilliant Uncirculated (BU) condition as crisp and fresh as the day it left the mint.

Only a limited number of exclusive Smithsonian Barber Dragon One-Ounce Silver reproductions were struck and authorized for release by the Smithsonian and each includes an exclusive authorized Smithsonian proprietary label. Nearly 125 years in the making, you can finally add Charles Barber’s famous Dragon to your collection! Order yours today!

Appealing to collectors on both sides of the Pacific Ocean, the Smithsonian Barber Dragon One-Ounce Silver Medal is sure to be in high demand. Don’t wait another 125 years – secure yours now!