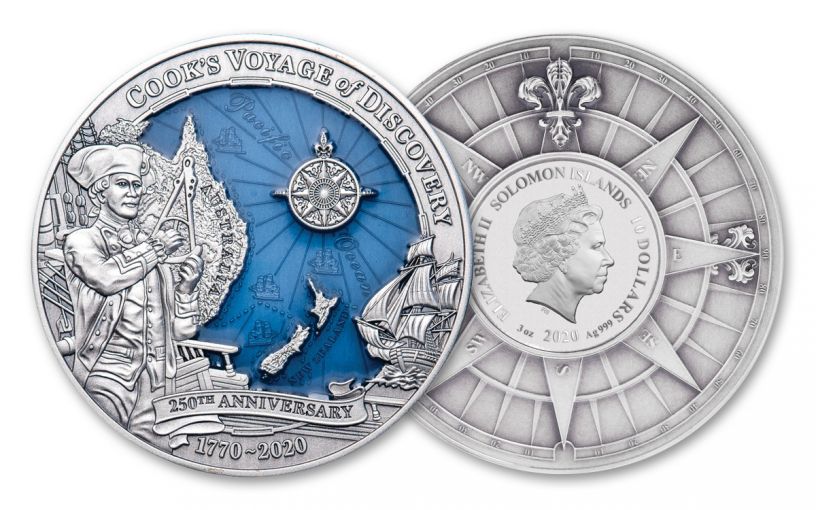 Availability: Out of Stock
This item is currently Out of Stock. Please sign up to be notified if this product becomes available.
Item #
356777
Add to Wish List Add to Wish List Wishlist is for registered customers. Please login or create an account to continue. Add to Compare

Explorer, navigator, cartographer and officer in Great Britain’s Royal Navy, Captain James Cook discovered much of the South Pacific for England. In 1770, during his first Voyage of Discovery, he made the first European contact with the eastern coastline of Australia. To pay tribute to the 250th Anniversary of that monumental feat, the Solomon Islands issued this jaw-dropping coin with designs so detailed they’re nothing short of spectacular.

Struck in three ounces of highly pure 99.9% silver, this $10 legal-tender coin depicts the good Captain aboard his ship the HMB Endeavor as it sails across the Pacific Ocean in search of a significant land mass Europeans believed existed in the southern hemisphere. Behind Cook’s rugged portrait is an intricately detailed map of Australia and New Zealand that takes on a translucent appearance thanks to addition of an “Ocean Blue” colored see-through enamel that’s so beautiful you’ll almost smell the salty sea air when you hold this numismatic masterpiece in your hands.

Remarkably, the coin literally rises to a new level of detail thanks to its Ultra High Relief (UHR) design. The superb images take on an added depth thanks to a deep concave field for maximum contrast with the design devices. As an added touch, each coin was given an antiqued finish that gives extra contrast to the coin’s design that accentuates every detail. Thanks to this antique finish, you can actually handle the coin to feel and experience every ridge and crevice without damaging it!

It should come as no surprise that extra attention has been paid to this coin’s detail. After all Captain Cook himself was a stickler for detail. It started with his ship, the Endeavor, which was a vessel typically used for carrying coal. It wasn’t going to win any races, but it was durable and could carry the supplies required for the long voyage such as lots of fresh fruit to keep his crew from getting scurvy. Cook also introduced several innovative rules to help keep the crew healthy. Rigidly enforced, the rules required that his men bathe every day and their bedding be aired out twice a week. These rules and planning helped Cook’s men stay healthy throughout the long voyage.

Each coin in this offer comes in a clear acrylic capsule and housed in its original mint packaging consisting of a custom wooden presentation box along with a blue shipper and a Certificate of Authenticity. An absolute must-have for any nautical-themed collection, the maximum worldwide edition limit for this coin was set at just 500 – a mintage far too low for everyone who would like one. There could be a massive wave of demand for this coin so get yours now before they’re all swept away!

Celebrate the250th anniversary of Captain Cook’s Voyage of Discovery with this specially antiqued Ultra High Relief coin. Get yours now before they all sail away!