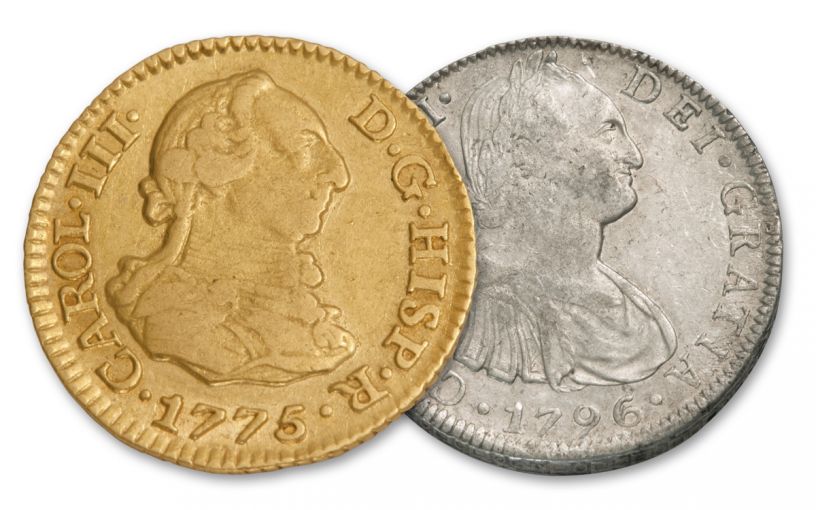 Availability: Call-In Only
This item is only available on a Call-In basis. Please call 1-800-510-6468 to speak to a representative.
Item #
342346
Add to Wish List Add to Wish List Wishlist is for registered customers. Please login or create an account to continue. Add to Compare

When Americans think “U.S. Silver Dollar,” their minds probably wander to the Silver Eagle — or for collectors, the historic Morgan Silver Dollar. But before either existed, our Founding Fathers carried Spanish Silver 8 Reales coins, along with Gold Half Escudo coins. These coins were used in American commerce well into the 1850s! In fact, Thomas Jefferson even recommended that our new country adopt the silver Spanish milled dollar as our monetary unit of value — and it was!

Spanish Coins that Were Accepted as U.S. Legal Tender

Now you have the chance to bring home one of each of these historic coins. The Silver 8 Reales coin comes in Fine (F) condition, struck between 1789 and 1797, the years of George Washington’s presidency! The Gold Half Escudo comes in Very Fine (VF) condition, struck between 1742 and 1788. Dates vary. After being granted legal tender status by the Second Continental Congress in 1776, a status which was reinforced by the Coinage Act of 1793, these coins were accepted as legal tender in the United States until 1857.

In addition to your historic gold and silver coins, you’ll also receive a copy of the Declaration of Independence struck in 24 karat gold — a $49.95 value!