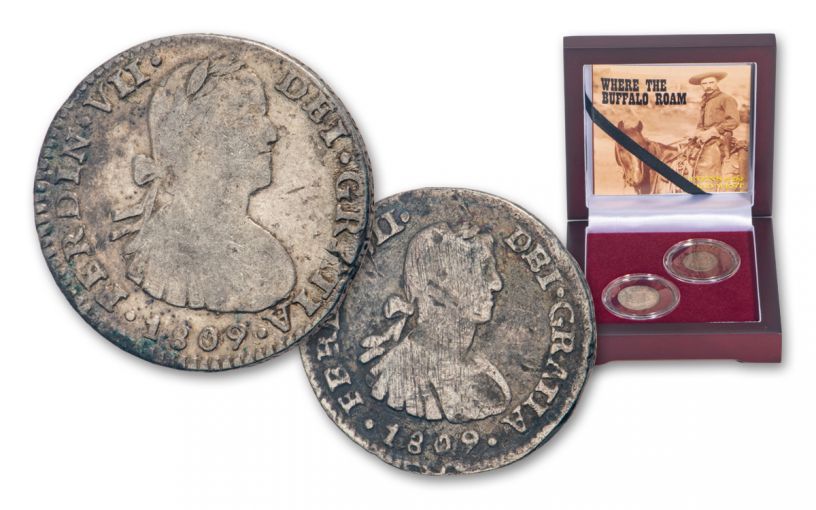 Availability: Out of Stock
This item is currently Out of Stock. Please sign up to be notified if this product becomes available.
Item #
350935
Add to Wish List Add to Wish List Wishlist is for registered customers. Please login or create an account to continue. Add to Compare

Where the Buffalo Roam: Coins of the Old West

Before the California Gold Rush and the massive amounts of silver flowing from Nevada’s Comstock Lode, cowboys, gunslingers and other denizens of the Old West didn’t carry American coins in their saddlebags. Instead, the coins that rattled on the side of their saddle and noisily spun on the bars of western saloons after ordering a shot of gut rot whiskey were Spanish coins like these vintage Reales and Half Reales.

Featuring genuine artifacts of a bygone age, this two-coin set brings together both coins, each dated between 1772 and 1821. Dates vary, but you’re guaranteed to receive coins struck nearly 200 years ago – each in Uncirculated condition brimming with stories of cattle drives, gunfights, bank robberies or even the mundane like purchasing some much-needed supplies at a general mercantile store.

Why Spanish coins you ask? It’s simple; prior to the United States striking its own coins, Spanish silver was granted official legal-tender status by the government. That status remained in effect until 1857 – but it took the West a fair bit longer to pay attention to the bigwigs in the East. In reality, the folks west of the Mississippi River continued using Spanish silver coins well into the 1870s!

Each set comes beautifully presented in a wooden display case and comes with a detailed storycard & Certificate of Authenticity. Don’t wait for too long to add this set to your collection – saddle up and ride with the 1772–1821 Spain Silver Reales of the Old West Two-Coin Set now before it, like the era from which these coins came, disappears into history!