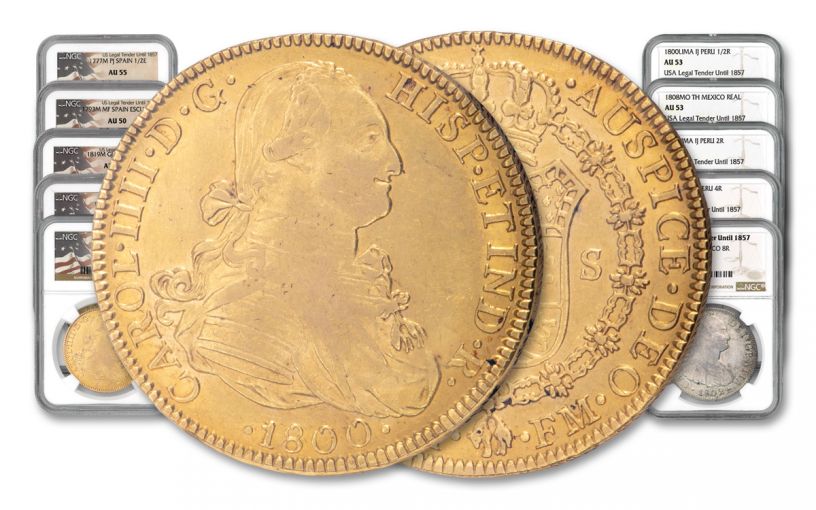 Availability: Out of Stock
This item is currently Out of Stock. Please sign up to be notified if this product becomes available.
Item #
349345
Add to Wish List Add to Wish List Wishlist is for registered customers. Please login or create an account to continue. Add to Compare

America’s first gold and silver coins weren’t American—they were Spanish! During pre-colonial days and even into the 19th century, Spanish Gold Escudos and Silver Reales coins changed hands continually in commerce, being perhaps the most accepted means of money in the young United States of America. They were even adopted as official legal tender by Congress.

Savvy collectors know this – and how hard it can be to put together a complete set of any coin type. Luckily, you have us at your disposal, and we’ve already put together for the world of collecting one of every single denomination of Spanish Portrait Coins struck in both Gold and Silver.

Each coin has been certified, graded and encapsulated by the Numismatic Guaranty Corporation (NGC) as being in About Uncirculated-50 to About Uncirculated-55 (AU50–AU55) condition. These are remarkable grades – especially when you consider how heavily they circulated in commerce more than two centuries ago. In fact, coins like these were officially accepted by the United States government as legal tender up until 1857 – and even after that, they were used frequently across remote areas of the Old West for many more years.

Your set will arrive housed together in a deluxe two-level black case. Hold history in your hands and secure this set now – we have just one in our vaults!