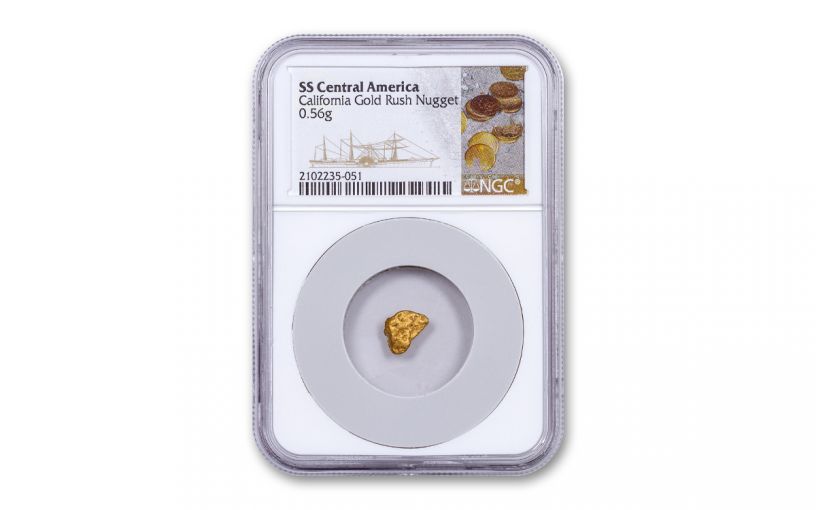 Availability: Out of Stock
This item is currently Out of Stock. Please sign up to be notified if this product becomes available.
Item #
360282
Add to Wish List Add to Wish List Wishlist is for registered customers. Please login or create an account to continue. Add to Compare

On September 12, 1857, the SS Central America sank to the bottom of the Atlantic Ocean 160 miles offshore from Charleston, South Carolina. The vessel was known as the “Ship of Gold.” And for good reason!

The Central America earned her nickname not for her splendor or decorations, but from her famous cargo: tons of gold coins, as well as raw nuggets from the California Gold Rush. When she went down, the Central America took with her an amount of gold that would be valued today at $300,000,000. That’s 300 million dollars! But it wouldn’t be recovered for at least 131 years.

In 1988, more than 7,000 gold coins were recovered from the wreck, making it a household name among collectors. But it would be another 25 years until the greatest discovery among the wreckage of the Central America would be located and recovered using an unmanned submersible.

Located 8,000 feet down, a recovery crew located something incredible: the ship’s safe, still closed! The rusty hinges gave way, and inside was a leather saddlebag, still tightly wrapped in leather straps as it had been when it was placed there in 1857. Inside were a number of small pouches, or “pokes” containing hundreds of gold nuggets that had come straight from the California Gold Rush! After 163 years, that gold is now ready for a new home – yours!

These Gold Rush Nuggets represent what may be the most direct connection with the California Gold Rush ever found. Discovered in a saddlebag stashed away in the purser’s safe of the Central America, these nuggets were on their way from California to the East Coast. We may never see their like again!

Each unique nugget is guaranteed to contain 0.51 to 0.60 grams of American California Gold Rush gold. No two are alike! Plus, each comes certified authentic by the Numismatic Guaranty Corporation (NGC) and has been encapsulated in an acrylic holder with a pedigreed label. You’ll also receive a velvet pouch and a storybook allowing you to share the incredible story of your California Gold Rush Nugget. Secure your historic gold nuggets now!