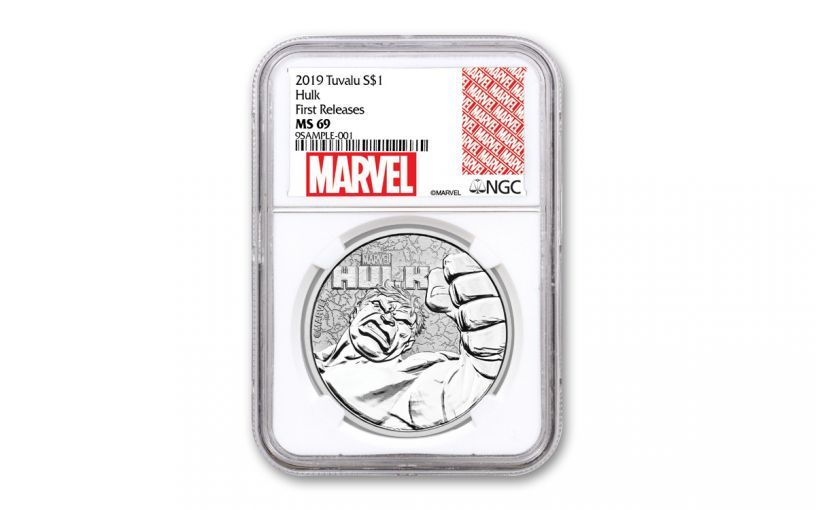 Availability: Out of Stock
This item is currently Out of Stock. Please sign up to be notified if this product becomes available.
Item #
352977
Add to Wish List Add to Wish List Wishlist is for registered customers. Please login or create an account to continue. Add to Compare

Capture the Power of the Incredible Hulk in Pure Silver

Dr. Bruce Banner was forever changed as a result of being exposed to the deadly blast of a Gamma Bomb. Since that fateful day he has developed a split personality disorder that is off the charts; one is his own, the other is the unstoppable force of nature known as The Incredible Hulk. Conceived by the genius of Stan Lee and Jack Kirby, the Hulk is a cross between Frankenstein’s Monster and Dr. Jekyll and Mr. Hyde – only in this case if Banner gets angry or upset, he mutates into the Hulk and the angrier the Hulk gets the stronger he gets. Today, he’s most famous for being a member of the Avengers – a team of superheroes charged with battling villains bent on destroying the Earth in the hugely successful Marvel Cinematic Universe.

Now the Hulk gets his time to shine – literally – on this brand-new coin minted in a full ounce of gleaming 99.99% silver! Struck by Australia’s world-renowned Perth Mint on behalf of the island nation of Tuvalu, this one-dollar legal-tender coin is the seventh release in Tuvalu’s popular Marvel Comics Coin Series, joining Spider-Man, Thor, Black Panther, Iron Man, Deadpool and Captain America in a line-up of some of the world’s most popular comic book superheroes.

Your 2019 Tuvalu Incredible Hulk One-Ounce Silver Coin has been graded by the Numismatic Guaranty Corporation (NGC) as being in near-perfect Mint State-69 (MS69) condition, a distinction that means your almost-flawless coin will showcase an impressive full strike and indistinguishable imperfections – well above and beyond the quality of the vast majority of coins in the series. In addition, NGC has certified your One-Ounce Silver Hulk to be a First Releases (FR) coin, a designation that means it was received by NGC or an NGC-approved depository within the first 30 days of its release. It will also come sonically sealed in an acrylic holder with a white display core and an exclusive Marvel label.

According to co-creator Jack Kirby, the idea for the Hulk was actually inspired by a real woman who lifted a car to save her baby. Throughout the Hulk’s long history in comics he has done some truly extraordinary things and been involved in many battles. In all likelihood, no one is capable of truly defeating the Hulk, though one hero was able to temporarily put a halt to one of the beast’s epic rampages. In that storyline, Spiderman was able to stop the Hulk by telling a joke that was so funny it calmed him down and turned him back into Bruce Banner!

The Incredible Hulk has thrilled fans of all ages with nearly 60 years of exciting adventures since his first appearance in the pages of Incredible Hulk #1 in May 1962. He has a major role in the 2019 film Avengers: Endgame that is setting box office records. He’s also the star of the Eisner Award-nominated series Immortal Hulk currently in print from Marvel Comics. Thanks to the success of the films and comics Ol’ Greenskin’s popularity is at an all-time high. That’s why you can bet fans and silver stackers alike around the world will be eager to scoop up these coins. With only 50,000 struck for worldwide release, the time to order your coin is now while you still can!

Collectors couldn't get enough of the previous Marvel coins from the Perth Mint, and we're expecting the Hulk’s army of loyal followers to have these targeted as well. Whether you're continuing your collection or just starting out; a massive Marvel maniac or a silver stacker looking to bring some action-packed excitement to your collection, this 2019 Incredible Hulk Coin is one not to miss!