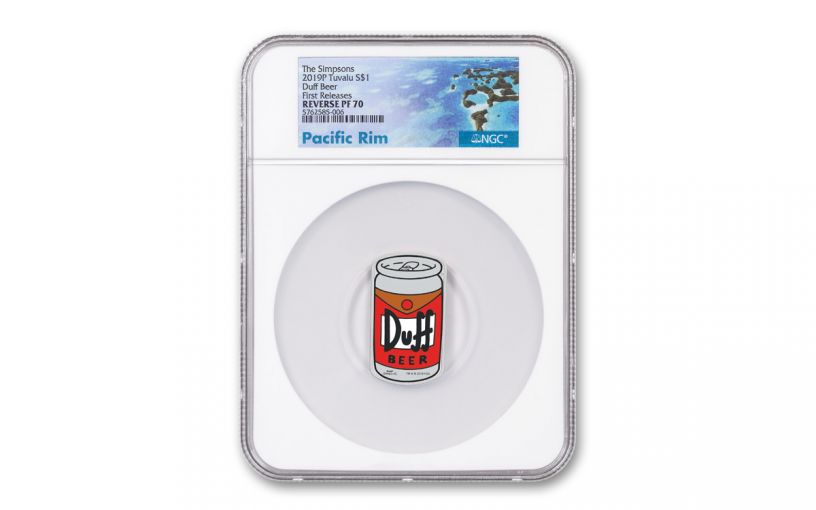 Availability: Out of Stock
This item is currently Out of Stock. Please sign up to be notified if this product becomes available.
Item #
353804
Add to Wish List Add to Wish List Wishlist is for registered customers. Please login or create an account to continue. Add to Compare

Get a Taste of Homer Simpson’s Favorite Brew

Ahhh, Duff Beer! The cause of – and solution – to all of Homer Simpson’s problems! Introduced in the very first full-length episode of The Simpsons™ that aired during the 1989 Christmas season, the fictional mass-produced American lager has gone on to become one of the most recognized brands in the world with real Duff Beer produced in the United States, South America, Europe and Australia.

To pay tribute to Homer’s favorite drink, Australia’s world-renowned Perth Mint is brewing up a commemorative of its own that’s sure to slake your thirst for Simpsons collectibles. It’s a unique can-shaped proof coin struck in a full ounce of 99.99% pure silver that, thanks to the addition of dazzling color, looks exactly like a can of Duff Beer! Officially licensed by Fox, this legal-tender one-dollar coin measures 27.3 mm x 49.2 mm and comes graded by the Numismatic Guaranty Corporation (NGC) as being in perfect Proof-70 Ultra Cameo (PF70UC) condition, a distinction that means your perfectly-graded proof will have ZERO imperfections – showing all features and fields exactly as the engraver and mint intended.

In addition, NGC has certified that your proof is a First Releases (FR) coin, a designation that means your coin was received by NGC or an NGC-approved depository within the first 30 days of the its release. Collectors seek out these coins because they are produced with new dies and considered to have sharper strikes and deeper mirrors than those that are struck later.

Issued on behalf of Tuvalu, an independent island nation in the South Pacific, the 2019 The Simpsons – Duff Beer One-Ounce Silver Coin is limited to a maximum worldwide edition limit of just 5,000. It will come presented in a clear acrylic case that allows you to see both sides of the can… oops… coin! It will also come packaged in a Simpsons-themed shipper and accompanied by a numbered Certificate of Authenticity.

As stated by Duffman, the super macho and abdominally enhanced spokesperson for the fictional beverage, you “Can’t get enough of that wonderful Duff!” And with only 5,000 of these collectible can proof coins available, you might not get any if you don’t order now! Don’t leave Duff Country without one!

Get a taste of Homer Simpson’s favorite brew with this 2019 Tuvalu One-Ounce Silver Duff Beer Colorized Shaped Proof. Click one – or even a six-pack – to your cart today!