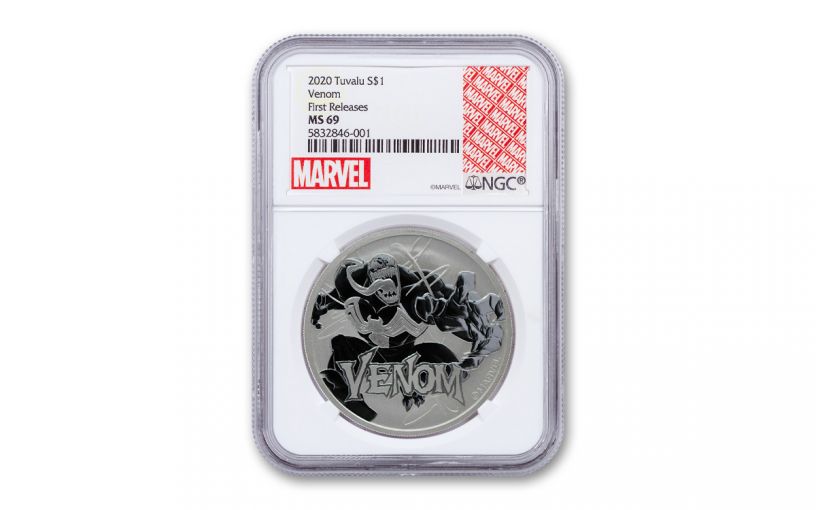 Availability: Out of Stock
This item is currently Out of Stock. Please sign up to be notified if this product becomes available.
Item #
359436
Add to Wish List Add to Wish List Wishlist is for registered customers. Please login or create an account to continue. Add to Compare

Now Venom and all his slimy gore is breaking loose on this coin minted in a full ounce of gleaming 99.99% silver! Struck by Australia’s world-renowned Perth Mint on behalf of the island nation of Tuvalu, this one-dollar legal-tender coin is the eighth release in Tuvalu’s popular Marvel Comics Bullion Series, joining Spider-Man, Thor, Black Panther, Iron Man, Deadpool, Captain America and the Hulk in a line-up of some of the world’s most popular comic book characters.

Each 2020 Tuvalu Venom One-Ounce Silver Coin available in this offer has been graded by the Numismatic Guaranty Corporation (NGC) as being in near-perfect Mint State-69 (MS69) condition, a distinction that means your almost-flawless coin will showcase an impressive full strike and indistinguishable imperfections – well above and beyond the quality of the vast majority of coins in the series. In addition, NGC has certified that these coins are First Releases (FR), a designation that means your coin was received by NGC or an NGC-approved depository within the first 30 days of its release. It will come sonically sealed in an acrylic holder with a white display core.

While the symbiote suit had been around for a few years, the Venom character did not make its official debut until May of 1988 in the groundbreaking release of Amazing Spider-Man #300 written by David Michelinie and illustrated by up-and-coming superstar artist Todd McFarlane. An evil mirror image of Spider-Man, Venom has since become one of the most popular characters in the entire Marvel universe and even appeared in his own film, 2018’s Venom starring Tom Hardy. The movie was a hit at the box office and a sequel is already in the works.