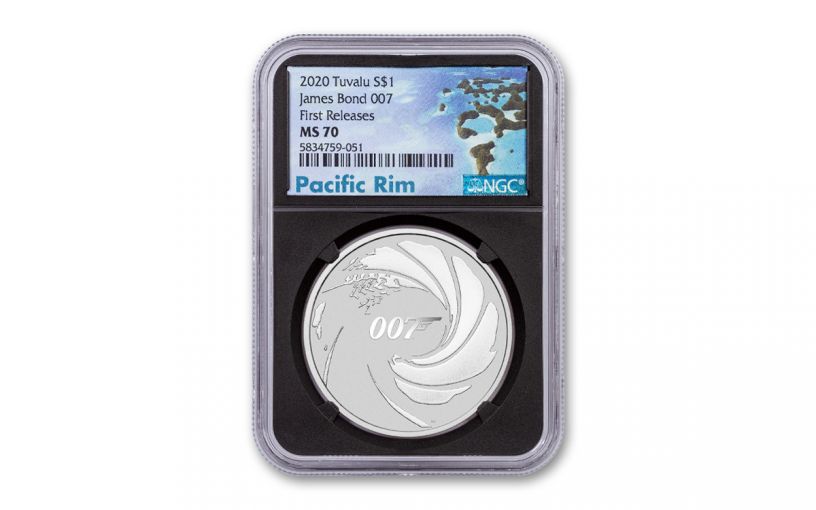 Availability: In Stock
This item will ship within 2 business days.
Item #
360209
Add to Wish List Add to Wish List Wishlist is for registered customers. Please login or create an account to continue. Add to Compare

Guns, girls and gadgets – those are the ingredients for a James Bond adventure film. And after 25 films that have grossed nearly $10 billion it’s hard to argue with that recipe for success. And now with the release of the latest Bond thriller, 2020’s No Time To Die starring Daniel Craig, Australia’s world-renowned Perth Mint is paying tribute to the suave secret agent with the release of an exciting silver bullion coin that is sure to have collectors and Bond fans racing to get their hands on one.

Struck in a full ounce of highly pure 99.99% silver, this action-packed coin features the iconic “gun barrel sequence” seen at the beginning of nearly every Bond film as well as the famous 007 logo in which the numeral “7” transforms into a pistol. You can almost hear the deep rhythm of the electric guitar playing the familiar theme backed by brass instruments as Bond walks into a pistol barrel’s sights and suddenly turns and fires his famous Walther PPK at the unseen assassin gunning for him.

The creation of British author Ian Fleming, British MI6 Secret Service agent James Bond first appeared on screen in 1962’s Dr. No with Sean Connery portraying 007. The film was made by producers Albert R. Broccoli and Harry Saltzman, who had joined forces to purchase the film rights to Fleming's novels through their production company Eon Productions. More than half a century later, the Bond films are the longest continually running film series of all time.

Your 2020 One-Ounce Silver James Bond Coin is official legal tender in Tuvalu, an independent South Pacific Ocean island nation within the British Commonwealth. Plus, each coin available in this offer has been graded by the Numismatic Guaranty Corporation (NGC) in flawless Mint State-70 (MS70) condition, a distinction that means these perfectly-graded coins will have ZERO imperfections – showing all features and fields exactly as the engraver and mint intended.

In addition, NGC has certified that these Silver James Bond Coins are First Releases (FR) issues, a designation that means they were received by NGC or an NGC-approved depository within the first 30 days of their release. These coins are officially licensed by EON Productions and will come sonically sealed in acrylic holders with exclusive Pacific Rim labels.

The small edition limit of just 30,000 coins is already a diabolically low total for a bullion release and even more unconscionably low considering how popular James Bond is around the world. Plus, it’s been announced as being completely sold out at the Mint! Did Auric Goldfinger, Ernst Stavro Blofeld or some other mad villain from SPECTRE bent on world domination set the edition limit this low just to get even with 007 and his legion of fans?! Don’t let these coins escape, click one – or several – to your cart today!

THE WORLD’S MOST POPULAR SPY – This coin pays tribute to the popularity of the James Bond film series and features the iconic “gun barrel sequence” seen at the beginning of nearly every bond film as well as the famous 007 logo in which the numeral “7” transforms into a pistol. The coin’s obverse features the effigy of Queen Elizabeth II.

STRUCK IN HIGHLY PURE SILVER – Each 2020 Tuvalu James Bond Coin was struck by Australia’s world-renowned Perth Mint in a full ounce of highly pure 99.99% silver and measures 32.6 mm in diameter.

KEY FIRST RELEASES CERTIFICATION – NGC has certified that this coin is a First Releases (FR) issue, meaning that it was among the first struck by the mint and was verified within the first 30 days of issue. It will come sonically sealed in an acrylic holder with an exclusive Pacific Rim label.

LOW LIMITED EDITION – The maximum worldwide mintage limit for this coin has been set at no more than 30,000 and is completely sold out at the mint.

This James Bond legal-tender silver bullion coin is a must-have for any fan of the film series. Get your 2020 Tuvalu One-Ounce Silver James Bond Coin now before some supervillain grabs them all for himself!