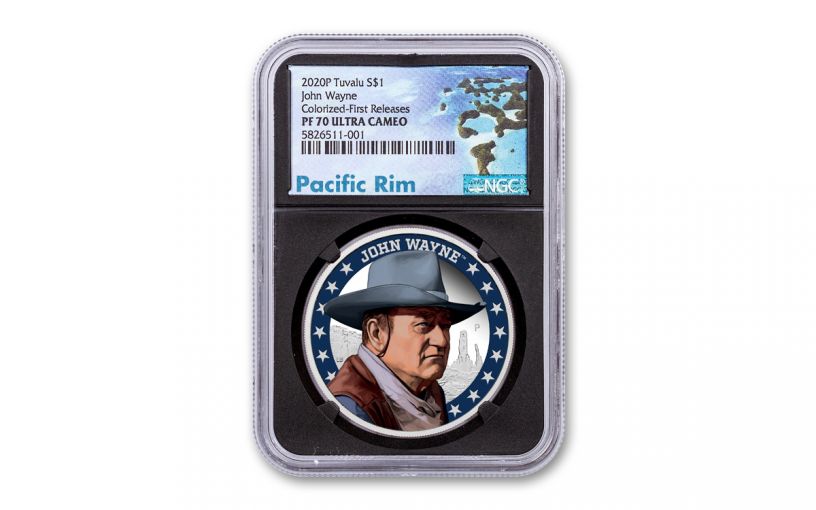 Availability: Out of Stock
This item is currently Out of Stock. Please sign up to be notified if this product becomes available.
Item #
357325
Add to Wish List Add to Wish List Wishlist is for registered customers. Please login or create an account to continue. Add to Compare

John Wayne wasn’t just a movie star; he was – and still is – a cultural Icon who symbolized American values and ideas. With a larger-than-life persona, “The Duke” was a top box office draw for three decades and was even awarded the Presidential Medal of Freedom! Today, more than four decades after his passing, the name John Wayne still resonates with people everywhere. It’s no wonder that his appeal has extended to the realm of collectible coins with this rip-roarin’ release from Australia’s prestigious Perth Mint that depicts him in bold, vibrant color!

Struck in a full ounce of highly pure 99.99% silver, this $1 legal tender coin pictures John Wayne against a backdrop of the scenic landscape of Monument Valley, a cluster of vast sandstone buttes located on the Arizona-Utah border. It was there that he made several of his most popular films including Stagecoach (1939), Angel and the Badman (1947), Fort Apache (1948), She Wore a Yellow Ribbon (1949) and The Searchers (1956). In all, The Duke appeared in more than 160 films, was nominated for three Academy Awards and won the Best Actor Award for his role in 1969’s True Grit.

Your 2020 Tuvalu One-Ounce Silver John Wayne Colorized Proof has been graded by the Numismatic Guaranty Corporation (NGC) as being in flawless Proof-70 Ultra Cameo (PF70UC) condition, a distinction that means your perfectly-graded proof will have ZERO imperfections – showing all features and fields exactly as the engraver and mint intended. In addition, NGC has certified that your John Wayne Proof is a First Releases (FR) coin, a designation that means your coin was received by NGC or an NGC-approved depository within the first 30 days of its release. It will also come sonically sealed in an acrylic holder with a black display core and an exclusive Pacific Rim label.

Officially licensed by John Wayne Enterprises, this coin release is the perfect tribute to John Wayne and will make a wonderful gift for any fan. Just 5,000 of these special coins will ever be struck, however, so don’t let them get away. Head one – or several – off at the past and straight into your cart today!

Listen, Pilgrim, there’s no better way to pay tribute to American icon John Wayne than with this impressive colorized silver dollar. With a limited edition of just 5,000 you’ll need to order yours now before they ride off into the sunset!