Updates from the World's Fair of Money

This week is a very exciting one in the coin collecting community! Put together by the American Numismatic Association, the 2017 World's Fair of Money is taking place this week – Tuesday, August 1st through Saturday, August 5th – in Denver, Colorado at the Colorado Convention Center. Even more exciting is the fact that not only will we be attending - we will have a booth front and center! Our booth (#1000) will have special edition coins, awesome behind-the-scenes interviews, and hundreds of dedicated numismatists milling about.

However, there is no need to worry if you are unable to attend. We will be sure to share all of our behind-the-scenes footage, exciting numismatic interviews, and other fun ANA-related content right here at GovMint.com! Also, be sure to like us on Facebook and follow us on Twitter, where even more videos, pictures, and behind-the-scenes information will be shared.

Check back here throughout the week for updates!

Recap of our 4th Day 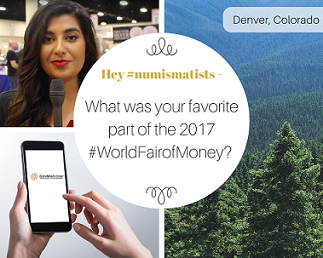 This week was easily one of our favorites! We had so much fun meeting and working with various different numismatists and coin collectors from around the country. We even took some time to meet with people across the bourse floor to learn what people's favorite coins are - and why! What's your favorite coin?

Not only did we have an amazing time in Denver at the convention center - we also had a great time sharing it with all of our dedicated fans online! As promised, we gave constant updates from the World's Fair of Money on our Facebook, Twitter, and here. Some of our most notable events and updates included: the ribbon cutting ceremony to commence the week, our Gold Krugerrand 50th anniversary party, interviewing Rick Harrison and hanging out with him at our booth, watching renowned numismatists Miles Standish get his head shaved by Rick Harrison for his wife's charity, working with kid numismatists on the bourse floor and giving away 2017 1-oz Silver Spider-Man coins as a reward, working with Andrea from The Coin Couch for her ANA vlog, and learning what everyone's favorite coin is.

Thank you to everyone in the American Numismatic Association and at the Colorado Convention Center for putting on such a wonderful event for numismatists across the United States! We loved it!

Recap of our 3rd Day
The ANA show is still going strong as the third day comes to a close. Our team has been fortunate enough to meet so many collectors and share their "coin show" experience. Who have you met at coin shows?

Hair flies at the ANA for Charity
We're over halfway through the week and exactly halfway through the 2017 World's Fair of Money! We have some very exciting events planned for today, such as an interview with Rick Harrison of 'Rick Harrison's Gold & Silver Pawn' and prominent numismatist Miles Standish having his head shaved - by Rick Harrison - to benefit the nonprofit Standish Foundation for Child and Family Centered Healthcare (started by Miles' wife). Would you let Rick shave your head for charity?

Thursday was probably our most exciting day at the 2017 World's Fair of Money! We had so much fun meeting with Rick Harrison, watching Miles Standish having his head shaved, and giving away prizes to the many cute kids who helped us out on the bourse floor!

Recap of Our 2nd Day
Our team is so excited to bring you the highlights of the first day of the ANA's World Fair of Money in Denver, Colorado. Make sure you say "Hello!" if you see anyone from our team around the show. Our team members will be wearing black shirts with the GovMint.com logo.

Also, make sure to stop by our booth (#1000) on August 2nd for a slice of cake as we celebrate the 50th anniversary of the Gold Krugerrand and the creation of the first-ever Silver Krugerrand!

Unable to attend the ANA World's Fair of Money, but there's something you want to see? Send us a message or comment on our Facebook page and let us know!

Want to see even more from the ANA World's Fair of Money? Check out our Facebook page to see more behind-the-scenes video and pictures of one of the largest numismatic shows of the year. If you are attending the show in Denver, Colorado, be sure to find our team (look for the black shirts with our logo!) and say "hi!" Use #ANAWFM to join the conversation on social media.

Coin shows are a great way for members of the numismatic world to meet coin experts, learn the ins-and-outs of world mints, see cool new coins in person, and share their passion with others. However, there are people who worry that the amount of coin shows and the attendance at coin shows might be dwindling. What are your thoughts?

Are Coin Shows on the Decline?