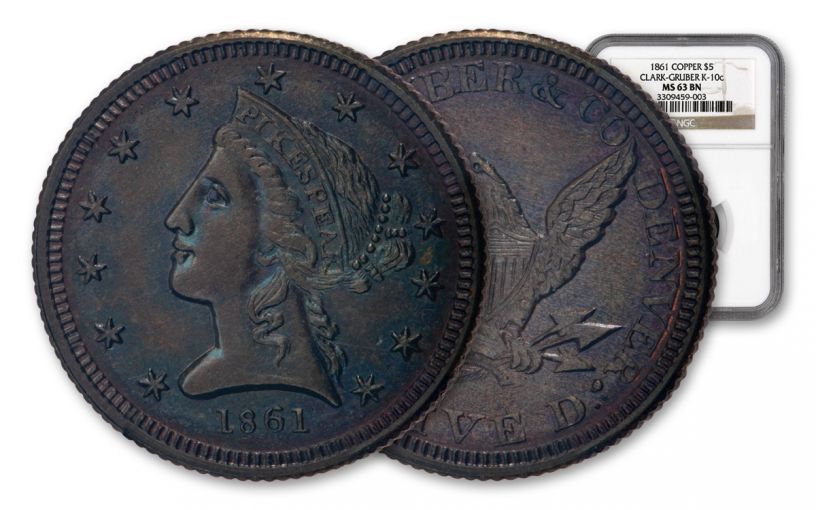 Availability: Call-In Only
This item is only available on a Call-In basis. Please call 1-800-510-6468 to speak to a representative.
Item #
351929
Add to Wish List Add to Wish List Wishlist is for registered customers. Please login or create an account to continue. Add to Compare
Recommended Products
Product Description

This rare piece may look like a normal Gold $5 Liberty, but it was actually struck in copper, and on Liberty’s coronet are the words “Pikes Peak” appear rather than “Liberty.” The reverse has been modified as well...but what does this mean?

Here’s the story: This piece is from a small series of special die trial pieces that were struck in Denver Colorado in 1861 during the first year of the American Civil War by Clark, Gruber & Company. Founded by Milton Clark and Emmanuel Gruber, the firm set up a private mint near Colorado’s gold fields during the Pike’s Peak Gold Rush and served as an assaying business. They discovered that they could save on shipping and insurance costs by striking gold coins for shipment back East rather than shipping gold dust. During this time, they minted several copper trial strikes of various denominations. They were ultimately elbowed out of the coining business in 1863 when their business was purchased by the U.S. Treasury Department and turned into a Federal assay office, an office that later became the Denver Mint.

To many collectors, the Clark & Gruber copper strikes are more exciting than their gold sisters due to their incredibly low mintage. It’s estimated that only 20 of these $5 copper coins were ever struck, and just 14 have been graded by either the Numismatic Guaranty Corporation (NGC) or the Professional Coin Grading service (PCGS). The specimen we have here has been graded by NGC as being in beautiful Choice Uncirculated Mint State-63 Brown (MS63 BN).

The Brown grade refers to the coin’s natural oxidation, a natural chemical reaction between a coin’s copper and its environment. Natural oxidation affects all copper coins over time, transforming their original orange/red color to a dark tone. To accurately grade copper coins, one needs to describe the color of the copper. In this coin’s case, its surface has reacted with the atmosphere to the extent that it is almost entirely a chocolate brown color, thus it is considered to be “Brown” and has been giving a “BN” designation.

How rare and scarce are these coins? The world-famous Smithsonian® does not even have an example of this coin! But now YOU can possess what the Smithsonian does not – but only if you hurry and secure this piece now. We have only one available, and just three coins come graded better in Brown. It’s an amazing find... but will it be yours?