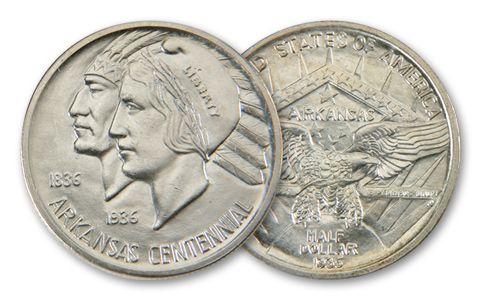 Availability: In Stock
This item will ship within 2 business days.
Item #
228781
Add to Wish List Add to Wish List Wishlist is for registered customers. Please login or create an account to continue. Add to Compare
Recommended Products
Product Description

The Coin that Forced Congress to Act!

Struck in 90% silver, the Arkansas Commemorative Half Dollar was meant to celebrate the 100th anniversary of Arkansas statehood. But thanks to it being issued for five years by three different mints along with a stream of variations specifically aimed at collectors, it proved to be something of a problem. So, when prices for the re-issues kept escalating, Congress finally pulled the plug on re-releasing early commemorative issues. Fed up with the shenanigans, Congress passed a law on August 5, 1939 terminating the re-issue of all previously-authorized commemoratives.

Now you can add this beautiful – and controversial – coin to you collection. Today, the Arkansas Centennial Silver Half-Dollar is one of the most popular commemoratives ever struck. Here’s your chance to get the first-year 1935 coin struck at the Philadelphia Mint in Brilliant Uncirculated (BU) condition.