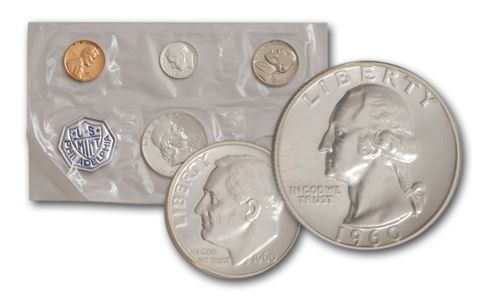 Availability: Out of Stock
This item is currently Out of Stock. Please sign up to be notified if this product becomes available.
Item #
222228
Add to Wish List Add to Wish List Wishlist is for registered customers. Please login or create an account to continue. Add to Compare
Recommended Products
Product Description

1960 Proof Sets were the first to contain widely recognized varieties deemed significant enough to merit their own catalog listings: the Large Date and Small Date Cents (as a general rule, very few Proof Sets can be collected by variety, underscoring both the consistent quality produced by the Mints and the collector hunger for anything different and unusual). Sales for the year jumped by more than half a million sets over 1959.

About the sets: 1960 was a great year for the variety collector. Some of the most spectacular Proof varieties occurred during this year. The first varieties to come out of 1960 were the Large Date and Small Date Varieties. The Small Date appears to be 10 – 15 times rarer than the Large Date. Some of the Sets may contain the following very rare varieties:

1960 Proof Coins are found with Brilliant, Cameo and Deep Cameo surfaces. Brilliant Proofs are the most common, Cameo Proofs of any denomination are fairly common, and this is the first year in which Deep Cameos begin to become more common, but still rare. The Nickel is the most difficult to locate in Deep Cameo Proof. Beware of buying unopened 1960 Proof Sets. "Sealed" Sets are likely to contain substituted coins (and even non-coins). Flat packs should be examined for small tears or cracks in the pliofilm. Even a hole the size of a pin can let in oxygen or moisture - both of which will react chemically with the metal of a coin, causing unsightly spots.