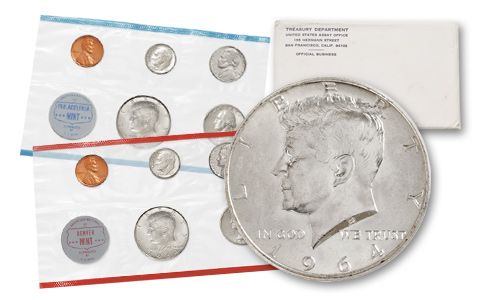 Availability: Out of Stock
This item is currently Out of Stock. Please sign up to be notified if this product becomes available.
Item #
182887
Add to Wish List Add to Wish List Wishlist is for registered customers. Please login or create an account to continue. Add to Compare
Recommended Products
Product Description

1964 Mint Sets went on sale on May 1, 1964. Within a week, over one million sets were ordered. People formed long lines for a chance to purchase even a single set at over-the-counter sales centers in the Philadelphia and Denver Mints, the U.S. Assay Office at San Francisco (as it was called then), and the Treasury Department in Washington. Initially, each buyer could purchase five sets, but because everyone (including their family members and even the family dog) was buying so many sets, the limit was reduced to one set per person.

About the sets: The coins in the 1964 Mint Sets were Uncirculated pieces pulled from regular production runs, thus the quality of the individual coins varies wildly from set to set and even within a set.

The 1964 Mint Set contained ten coins, including the following:

Original packaging: The coins in the 1964 Special Mint Sets were sealed in flat pliofilm packs, along with a blue and silver disk identifying this as a Special Mint Set. The pack was sealed in a white envelope.

North Vietnamese torpedo boats attacked an American destroyer in the Gulf of Tonkin.