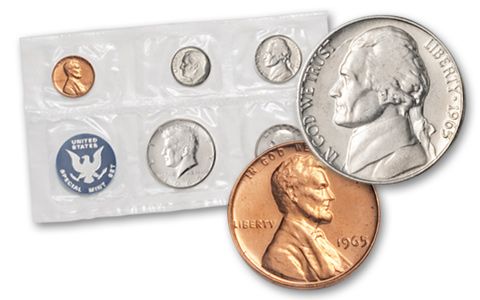 Availability: Out of Stock
This item is currently Out of Stock. Please sign up to be notified if this product becomes available.
Item #
182888
Add to Wish List Add to Wish List Wishlist is for registered customers. Please login or create an account to continue. Add to Compare
Recommended Products
Product Description

In 1964, America faced an impending coin shortage due to speculation and hoarding of small change, thus requiring all the attentions of the Philadelphia Mint. The shortage was so severe, that the Mint broke a long-standing tradition, and produced 1964 dated coins, as late as 1966! Even worse, the Treasury discontinued production of Proof Sets and Mint Sets, so that full production capacity could be focused on coins for circulation. As an alternative, the Mint began producing Special Mint Sets containing coins that were, in effect, souped-up Uncirculated pieces. The "special" finish was brighter and shinier than on regular coins struck for general use, but short of the brilliant, mirrored surfaces of true Proof coins.

Even though these sets were struck and produced at the San Francisco Mint (then an Assay Office), the coins bore no mintmark. Three things worked against the 1965 Special Mint Sets: One, they contained no 90% Silver coins (the Dime and Quarter were made of Copper-Nickel; the Half Dollar only 40% Silver); two, the public failed to embrace the new finish; and three, the Mint priced the sets at an unprecedented $4.00 - mostly to reduce speculation, and partially to pay for a seventy-five cent registered mailing fee (instituted to reduce excessive losses through the mail system).

The Mint sent IBM order cards to 800,000 buyers of either the 1964 Proof or Mint Sets. On one side of the card, buyers were instructed to make remittance to the "officer in charge"; on the other side of the same card, a conflicting instruction asked that remittance be made to the Superintendent of the U.S. Mint." Fortunately, payments made either way were accepted.

Orders for the 1965 Special Mint Sets were accepted through June 15, 1966 and shipment of sets began on May 20th. The public's reaction to the Special Mint Sets was subdued - sales for 1965 were less than half of the combined sales of 1964 Proof Sets and Mint Sets.

Original packaging: The coins in the 1965 Special Mint Sets were sealed in flat pliofilm packs along with a blue and silver disk identifying this as a Special Mint Set. The pack was sealed in a white envelope.

American involvement in Vietnam escalated, so U.S. forces went on the offensive, and the number of U.S. servicemen in Vietnam exceeded 150,000.