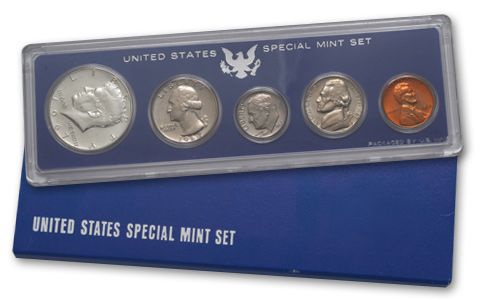 Availability: In Stock
This item will ship within 2 business days.
Item #
182890
Add to Wish List Add to Wish List Wishlist is for registered customers. Please login or create an account to continue. Add to Compare
Recommended Products
Product Description

In 1967, collector dissatisfaction with the Special Mint Set revealed itself in a drop in sales of nearly 400,000 units. Collectors could simply not get used to the unusual SMS Finish, and they petitioned the Treasury continually to resume production of Proof Sets.

Most 1967 SMS coins have a brilliant finish. Cameo surfaces are rare and Deep Cameo surfaces are extremely rare (the Cent may not exist as Deep Cameo). Some 1967 Special Mint Sets may contain a very rare Doubled Die Obverse Quarter (check "LIBERTY" and "IN GOD WE TRUST").