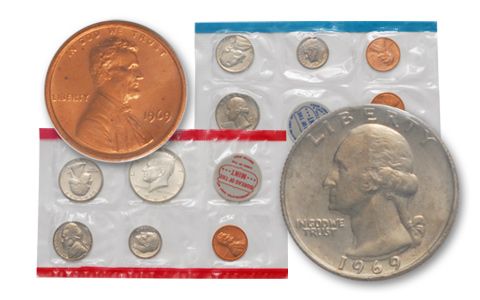 Availability: In Stock
This item will ship within 2 business days.
Item #
182892
Add to Wish List Add to Wish List Wishlist is for registered customers. Please login or create an account to continue. Add to Compare
Recommended Products
Product Description

This was the last year that a precious metal coin - the Kennedy Half Dollar - was used for circulating U.S. coinage.

About the sets: The coins in the 1969-PDS Mint Sets were Uncirculated pieces pulled from regular production runs, thus the quality of the individual coins varies widely from set to set, and even within a set.

Look closely at the 1969-D Dime in your set for the spectacular Repunched Mintmark variety that shows a D next to another D.

The 1969-PDS Mint Set contained ten coins, including the following:

Original packaging: Same as in 1968

Yassir Arafat became the leader of the Palestine Liberation Organization.