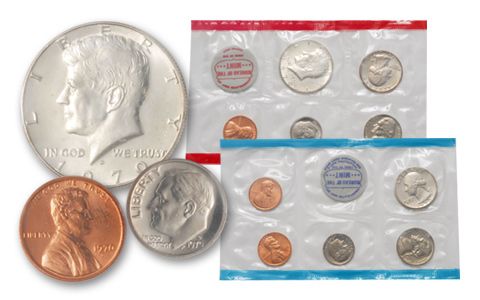 The 1970-PDS Mint Set includes the last of the 40% Silver Clad Half Dollars, none of which were released into regular circulation. As a result, many 1970 Mint Sets have been broken up just so collectors can have an example of the Half Dollar.

About the sets: The coins in the 1970-PDS Mint Sets were Uncirculated pieces pulled from regular production runs, thus the quality of the individual coins varies widely from set to set, and even within a set.

1970 Mint Sets are found with either Large Date or Small Date Cents. The Small Date Set is approximately fifteen to twenty times as rare as the Large Date version. A scarce variety that is popular is the Large Date 1970-S Cent. This variety shows clear doubling of the mintmark. Some sets may contain one of the few different scarce 1970-D Doubled Die Reverse Dimes that show doubling of "UNITED STATES OF AMERICA". A rare variety of the 1970-D Quarter shows doubling of the "UNITED STATES OF AMERICA" and "QUARTER DOLLAR" on the reverse.

Anwar el-Sadat became President of Egypt following the death of Gamal Abdal Nasser. The Aswan Dam was completed in Egypt.