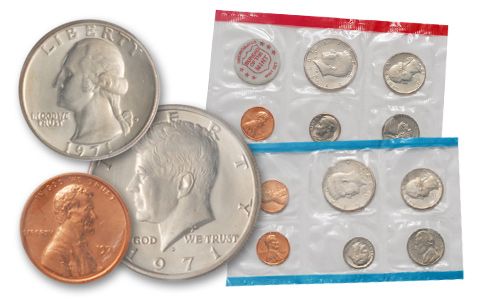 Availability: In Stock
This item will ship within 2 business days.
Item #
182894
Add to Wish List Add to Wish List Wishlist is for registered customers. Please login or create an account to continue. Add to Compare
Recommended Products
Product Description

1971 saw the introduction of the Copper-Nickel Clad Half Dollar, ending a tradition of more than 175 years of Silver (or part Silver) Half Dollars. The Treasury raised the price of the Mint Sets to $3.50 but added an extra Half Dollar to compensate for some of the difference. The Eisenhower Dollars, which debuted in 1971, were NOT included in the official Mint Sets; instead, the regular strikes were released directly into circulation. 40% Silver Clad versions of the 1971-S Eisenhower Dollar were sold individually to collectors at a premium (known as “Blue Ikes”). The coins were sealed in a flat pliofilm pack and placed in a glossy blue envelope.

About the sets: The coins in the 1971-PDS Mint Sets were Uncirculated pieces pulled from regular production runs, thus the quality of the individual coins varies widely from set to set, and even within a set.

The 1971-PDS Mint Set contained eleven coins, including one each of the Lincoln Cent, Jefferson Nickel, Roosevelt Dime, Washington Quarter and Kennedy Half Dollar from both the Philadelphia and Denver Mints and one Lincoln Cent from the San Francisco Mint.

The 26th Amendment to the U.S. Constitution granted eighteen-year-olds the right to vote. The London Bridge was dismantled, brought to the United States, and rebuilt in Lake Havasu City, Arizona.