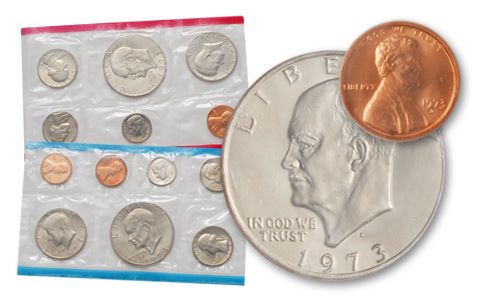 Availability: In Stock
This item will ship within 2 business days.
Item #
182896
Add to Wish List Add to Wish List Wishlist is for registered customers. Please login or create an account to continue. Add to Compare
Recommended Products
Product Description

In 1973, the Treasury added two Eisenhower Dollars to the United States Mint Set. The addition was a key factor in the price of the sets being raised to $6.00 apiece, causing a dramatic drop-off in sales by nearly 1 million sets.

About the sets: The coins in the 1973-PDS Mint Sets were Uncirculated pieces pulled from regular production runs, thus the quality of the individual coins varies widely from set to set, and even within a set.

The 1973-PDS Mint Set contained thirteen coins, including one each of the Lincoln Cent, Jefferson Nickel, Roosevelt Dime, Washington Quarter, Kennedy Half Dollar and Eisenhower Dollar from both the Philadelphia and Denver Mints and one Lincoln Cent from the San Francisco Mint.

Original packaging: The coins in the 1973-PDS Mint Set were sealed in two pliofilm flat packs: the D-Mint coins were placed together in one of the packs, and the P- and S-Mint coins were placed together in another. Because of the inclusion of the Eisenhower Dollars, no space was available for the disks that formerly identified the Mints. The pack containing the D-Mint coins was edged in red; the pack containing the P- and S-Mint coins was edged in blue. The two pliofilm packs and two pieces of thin cardboard (for protection) were sealed in an officially inscribed, white mailing envelope.

The U.S. and North Vietnam signed a cease-fire agreement, ending the U.S. involvement in the war. An embargo by OPEC (Organization of Petroleum Exporting Countries) caused American oil and gasoline prices to soar.