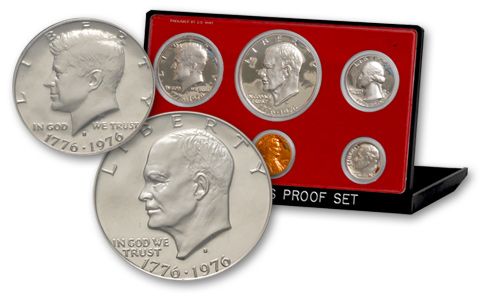 Availability: In Stock
This item will ship within 2 business days.
Item #
222240
Add to Wish List Add to Wish List Wishlist is for registered customers. Please login or create an account to continue. Add to Compare
Recommended Products
Product Description

1975-S Proof Sets had collectors scratching their heads, asking "Why are the Dollar, Half Dollar, Quarter coins dated 1976?" In preparation for America's 200th Birthday, the U.S. Mints began producing Bicentennial Quarters, Half Dollars, and Dollars in 1975 that were dated 1976. Proof versions of these patriotic designs were included in 1975 Proof Sets, helping to boost sales by over 200,000 units.

About the sets: 1975-S Proof Coins are found with Brilliant, Cameo, and Deep Cameo surfaces. All three finishes are readily available.

An unknown (but extremely small) number of Proof 1975-S Dimes were struck without a mintmark. Although Proof coins were being struck at the San Francisco Mint at the time, the Philadelphia Mint was responsible for making the Proof dies (and adding the mintmark). Apparently, at least one die was sent from Philadelphia without the mintmark, and a small number of "S"-less Dimes were struck and released before the error was discovered. The 1975 "S"-less Dimes are so rare that they were not even discovered until 1978, when two examples surfaced. They may, in fact, be one of the rarest coins of the 20th century!

Original packaging: The individual coins of the 1975-S Proof Set were sealed in a two-piece, clear plastic case. Raised rings of plastic separated the coins from each other, and a red, felt-covered paper insert was added for visual impact. The clear plastic case containing the coins was inserted into a molded, black plastic frame with the raised silver letters "UNITED STATES PROOF SET", and a hinged flap that could be flipped over for display purposes. A black card cover imprinted with silver letters, "United States Proof Set • 1975" protected both the case and the frame.