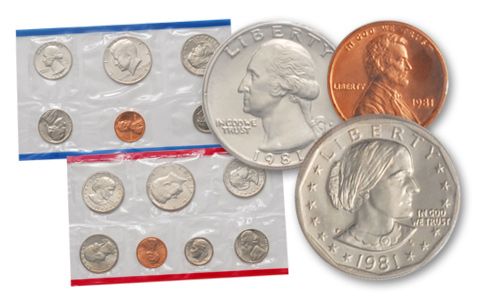 In 1981, the Treasury raised the price of Mint Sets by $2.00, capitalizing on the facts that this was to be the last year of the Anthony Dollar, and that none would be sold or released outside of Mint Sets. Collectors responded enthusiastically. The number of sets that have been destroyed for the Dollars must number in the tens, if not hundreds, of thousands. This set will always be a key set from the 1980s.

About the sets: The coins in the 1981-PDS Mint Sets were Uncirculated pieces pulled from regular production runs, thus the quality of the individual coins varies widely from set to set, and even within a set.

Some 1981 Mint Sets contain a nice 1981-D Nickel with a Doubled Die Reverse (check any of the reverse lettering for doubling).

The 1981-PDS Mint Set contained thirteen coins, including the following:

Ronald Reagan survived an assassination attempt by John W. Hinckley, Jr. Sandra Day O'Connor was appointed the first female Justice of the Supreme Court. The American hostages held in Iran (some for up to 444 days) were finally released.