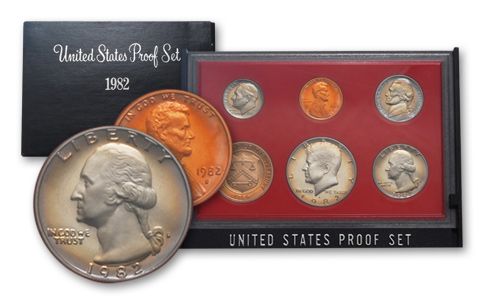 The 1982-S Proof Set is one of the more affordable modern issue sets. Sales were down from 1981, but the mintage was 3.8 million to fill collector demand.

Each set contained five coins: One example each of the Lincoln Cent, Jefferson Nickel, Roosevelt Dime, Washington Quarter, and Kennedy Half Dollar. A sixth piece, a Proof Treasury Token in Bronze, was included to fill the hole occupied in the previous years by the Anthony Dollar.

About the sets: All coins in the 1982-S Proof Set were intended to have a Cameo or Deep Cameo Finish.

All of the Cents in the 1982-S Proof Sets are of the Large Date variety, and all are of the old bronze composition (as opposed to the newer Copper-plated Zinc). Reportedly, some Proof Small Date Cents were struck in Bronze, but none have been seen, and all were supposedly destroyed. On the Large Date Cents, the 2 of the date is close to the rim; on the Small Date Cent, the date is far away from the rim.

Original packaging: The coins of the 1982-S Proof Set were placed in individual holes in a red plastic insert, then sealed in a two-piece, clear plastic case. The clear plastic case containing the coins slid into a molded, black plastic frame, with the raised silver letters "UNITED STATES PROOF SET" for storage.

For display purposes, the frame served as a base for the case containing the coins, which fit into a slot in the frame. A black card slipcase, imprinted in silver with the words: "United States Proof Set • 1982", protected both the case and the frame.

The Falkland Islands were invaded by Argentina, and then liberated by Great Britain. Russian leader Leonid Brezhnev died.