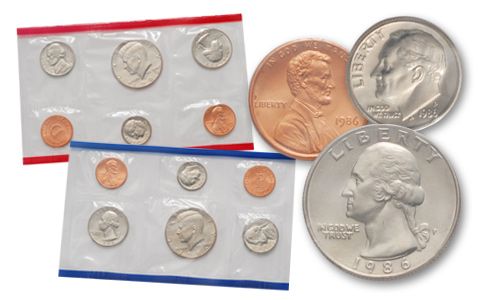 Availability: Out of Stock
This item is currently Out of Stock. Please sign up to be notified if this product becomes available.
Item #
182908
Add to Wish List Add to Wish List Wishlist is for registered customers. Please login or create an account to continue. Add to Compare
Recommended Products
Product Description

The 1986-PD Mint Set had the lowest mintage of any Mint Set in more than twenty years, and except for the 1970-PDS Small Date Mint Set, this is one of the most prized Mint Sets in any collection.

About the sets: The coins in the 1986-PD Mint Sets were Uncirculated pieces pulled from regular production runs, thus the quality of the individual coins varies widely from set to set, and even within a set.

The 1986-PD Mint Set contained ten coins, including the following:

Original packaging: The 1986-PD Mint Set consisted of two pliofilm packs. The first one contained the Philadelphia Mint coins and a Cent-sized token with a large "P" (for Philadelphia), while the second pack contained coins from the Denver Mint, plus a token with a large letter "D." The pack containing the D-Mint coins was edged in red; the pack containing the P-Mint coins was edged in blue. The two pliofilm packs and a card listing the specifications for each coin were then sealed in an officially inscribed, colorful mailing envelope.

The space shuttle Challenger exploded shortly after lift-off. The Oprah Winfrey Show made its television debut.

A Russian nuclear reactor at Chernobyl exploded, releasing eight tons of radioactive material into the atmosphere. Ferdinand and Imelda Marcos fled the Philippines.