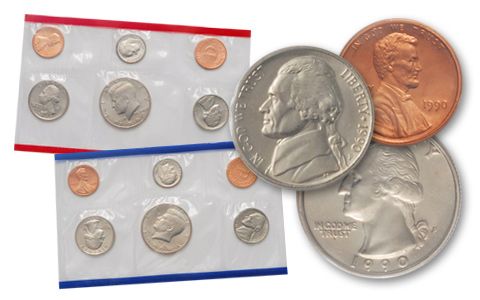 Availability: Out of Stock
This item is currently Out of Stock. Please sign up to be notified if this product becomes available.
Item #
182912
Add to Wish List Add to Wish List Wishlist is for registered customers. Please login or create an account to continue. Add to Compare
Recommended Products
Product Description

Mint Set sales for 1990 were a healthy 1.8 million sets, indicating continued strong interest in this area.

About the sets: The coins in the 1990-PD Mint Sets were Uncirculated pieces pulled from regular production runs, thus the quality of the individual coins varies widely from set to set, and even within a set.

The 1990-PD Mint Set contained ten coins, including the following:

Original packaging: The 1990-PD Mint Set consisted of two pliofilm packs. The first one contained the Philadelphia Mint coins and a Cent-sized token with a large "P" (for Philadelphia), while the second pack contained coins from the Denver Mint, plus a token with a large letter "D." The pack containing the D-Mint coins was edged in red; the pack containing the P-Mint coins was edged in blue. The two pliofilm packs and a card listing the specifications for each coin were then sealed in an officially inscribed, colorful mailing envelope.

The Hubble telescope was launched into space. Seinfeld and The Simpsons debuted on television. "NC-17" replaced the "X" rating for movies.

Nelson Mandela was freed from a South African jail after being imprisoned for more than 27 years. Iraq invaded and annexed Kuwait, claiming losses due to Kuwaiti overproduction of oil. Lech Walesa became the first president of Poland.