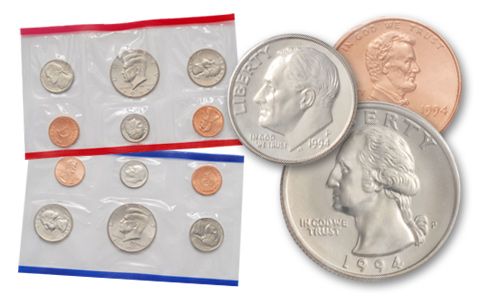 Availability: Out of Stock
This item is currently Out of Stock. Please sign up to be notified if this product becomes available.
Item #
182916
Add to Wish List Add to Wish List Wishlist is for registered customers. Please login or create an account to continue. Add to Compare
Recommended Products
Product Description

Interest in Mint Sets continued to wane in 1994, with the mintage dropping to the second lowest level in thirty years. So, this an attractive set to the knowledgeable collector.

About the sets: The coins in the 1994-PD Mint Sets were Uncirculated pieces pulled from regular production runs, thus the quality of the individual coins varies widely from set to set, and even within a set.

The 1994-PD Mint Set contained ten coins, including the following:

Original packaging: The 1994-PD Mint Set consisted of two pliofilm packs. The first one contained the Philadelphia Mint coins and a Cent-sized token with a large "P" (for Philadelphia), while the second pack contained coins from the Denver Mint, plus a token with a large letter "D." The pack containing the D-Mint coins was edged in red; the pack containing the P-Mint coins was edged in blue. The two pliofilm packs and a card listing the specifications for each coin were then sealed in an officially inscribed, light blue mailing envelope.

After a dramatic highway pursuit, O.J. Simpson was captured and accused of the murder of his ex-wife, Nicole Brown Simpson, and her friend, Ronald Goldman. Woodstock '94 attempted to recreate the memory of the original Woodstock. Major League baseball players began a strike that was to last 232 days.