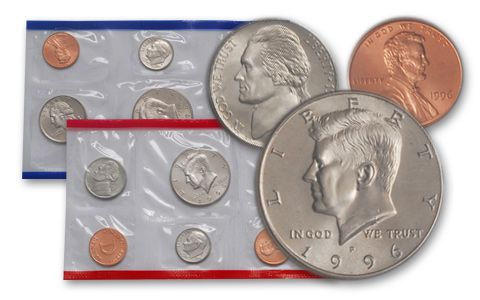 Availability: In Stock
This item will ship within 2 business days.
Item #
183517
Add to Wish List Add to Wish List Wishlist is for registered customers. Please login or create an account to continue. Add to Compare
Recommended Products
Product Description

As a gimmick to help promote sales of U.S. Mint Sets, the Treasury added a 1996-W Dime to the 1996 Mint Sets. The result was a nice increase in sales of over 400,000 sets, an almost 40% increase, and not to mention one of the best varieties of the Roosevelt Dime.

About the sets: The coins in the 1996-PDW Mint Sets were Uncirculated pieces pulled from regular production runs, thus the quality of the individual coins varies widely from set to set, and even within a set. Because there was no room for the 1996-W Dime in the regular pliofilm packs, the coin was placed in its own separate, small sealed pack. These can sometimes be lost or overlooked, so be sure to examine any 1996 Mint Sets carefully, to be sure they have the extra Dime.

The 1996-PD Mint Set contained eleven coins, including the following:

Original packaging: The 1996-PD Mint Set consisted of two pliofilm packs. The first one contained the Philadelphia Mint coins and a Cent-sized token with a large "P" (for Philadelphia), while the second pack contained coins from the Denver Mint, plus a token with a large letter "D." The pack containing the D-Mint coins was edged in red; the pack containing the P-Mint coins was edged in blue. The two pliofilm packs and a card listing the specifications for each coins were then sealed in an officially inscribed, light blue mailing envelope, which was imprinteed with an image of two Roosevelt Dimes coming out of a coining press.

Mad Cow Disease broke out in England. The Taliban seized control of Kabul, the capital of Afghanistan. Scientists cloned Dolly, the first sheep, from adult cells. Internet use jumped to over 40 million people.