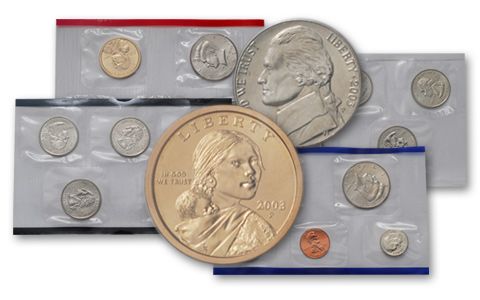 Availability: In Stock
This item will ship within 2 business days.
Item #
182925
Add to Wish List Add to Wish List Wishlist is for registered customers. Please login or create an account to continue. Add to Compare
Recommended Products
Product Description

About the sets: The coins in the 2003-PD Mint Sets were Uncirculated pieces pulled from regular production runs, thus the quality of the individual coins varies widely from set to set and even within a set.

The 2003-PD Mint Set contained twenty coins, including the following:

One example of each of the following from the Philadelphia and Denver Mints: Tennessee Quarter, Ohio Quarter, Louisiana Quarter, Indiana Quarter, and Mississippi Quarter (all Copper-Nickel Clad).

The United States Department of Homeland Security begins operation. The U.S. Supreme Court upholds California's "three strikes you're out" law. Martha Stewart and her broker are indicted for using privileged investment information and then obstructing a federal investigation. In a recall election in California, voters removed Governor Gray Davis and replaced him with Arnold Schwarzenegger.

Saddam Hussein and his family stole approximately $1 billion from Iraq's Central Bank, just hours before the United States began bombing Iraq. In March, the U.S. and Britain commenced the invasion of Iraq with their "Shock and Awe" campaign by enacting a massive air strike on military targets in Baghdad. The initial major combat ended by May 1st.