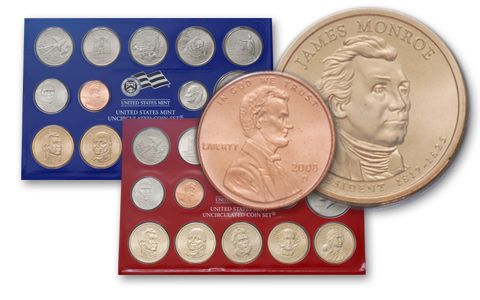 Availability: In Stock
This item will ship within 2 business days.
Item #
182930
Add to Wish List Add to Wish List Wishlist is for registered customers. Please login or create an account to continue. Add to Compare
Recommended Products
Product Description

The 2008-PD Mint Set contained twenty-eight coins, including the following:

About the sets: The 2008-PD Mint Set marked the final five Statehood Quarters from the original ten-year 50 State Quarters program. The program was so popular with collectors that it was extended in 2009 to include U.S. territories as well. The 2008-PD Mint Set is also notable for including the final Sacagawea Golden Dollar before the series was re-launched as the Native American Dollar series in 2009.

The 2008 Summer Olympics take place in Beijing, China. Chinese athletes won the most gold medals, with 51, and 100 medals altogether, while the United States had the most total medals with 110. Fidel Castro announces his resignation as President of Cuba. Human remains found in 1991 are identified as Tsar Nicholas II of Russia, using DNA analysis.