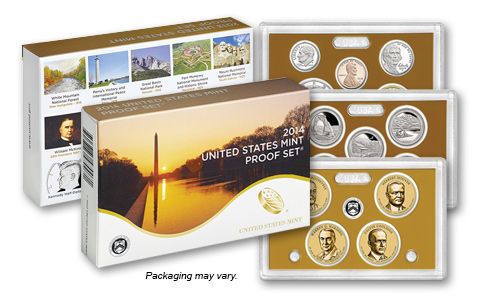 Availability: Out of Stock
This item is currently Out of Stock. Please sign up to be notified if this product becomes available.
Item #
228396
Add to Wish List Add to Wish List Wishlist is for registered customers. Please login or create an account to continue. Add to Compare
Recommended Products
Product Description

About the sets: All coins in the 2014-S Proof Set were intended to have a Cameo or Deep Cameo Finish. The Native American dollar contained in the 2014 set features a one-year-only design of the theme "Native Hospitality."

Original packaging: The 2014-S Proof Set comes in three cases. One case contains the Cent, Nickel, Dime, Half Dollar, and Native American Dollar; one contains the five America the Beautiful Quarters, while the third case houses the four Presidential Dollars. The coins are inserted into holes in a cardboard holder, and then sealed inside a two-piece, clear plastic case. The cases and certificate of authenticity were inserted into a white and brown card-stock box featuring a sunset photo of the Washington Monument and Lincoln Memorial Reflecting Pool.